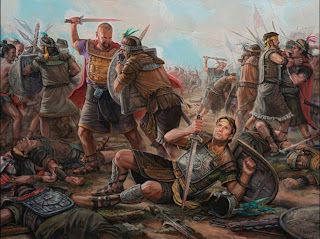 [4] Duance Boyce, Even Unto Bloodshed: An LDS Perspective on War (Salt Lake City: Greg Kofford Books, 2015), 171-173. Colin Gray, The Implications of Preemptive and Preventive War Doctrines: A Reconsideration, (Strategic Studies Institute Online, 2007), 28. http://www.strategicstudiesinstitute.army.mil/pdffiles/PUB789.pdf : For a representative sample of the most extreme and unacademic versions, see Kendal Anderson, War: A Book of Mormon Perspective: How the War Chapters of the Book of Mormon Warn Against Wars of Aggression and the Warfare State, (Create Space, 2014), 21 where “evil power hungry dictators” are the only ones that start preemptive war, and page 42 where he calls the practice an “assault on humanity itself.” For a sample of the voluminous personal attacks on proponents of the practice, Irvin Hill wrote, “A writer proving the Book of Mormon defense of Preemptive war, or just another war mongering propagandist?,” Obedient Anarchy, January 28th, 2015. (Accessed, October 21st, 2019 http://www.obedientanarchy.com/2015/01/28/a-writer-proving-the-book-of-mormon-defense-of-preemptive-war-or-just-another-war-mongering-propagandist/ )
Posted by Morgan Deane at 6:40 PM