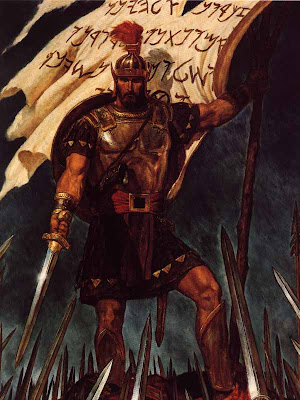 [I shared this on facebook and though it deserved a more permanent place. As someone who specializes in military history and published extensively about Moroni and the Book of Mormon, I am uniquely qualified to comment.]

People are spazzing out about Mike Lee's comparison of Trump to Captain Moroni when I think it was pretty good. Lee's comparison was pretty narrow to begin with, by pointing to a specific scripture that Trump is not seeking power but to tear it down.

Trump has been a disruptive outsider against the Washington establishment. That word was used so much in 2016 that I thought I should start a restaurant called the establishment. I don't like the phrase deep state as it sounds fairly conspiratorial, but entrenched bureaucracy is what I use. We just had a Homeland security official come out as this deep throat type member of the resistance. The phrase resistance itself is rather arrogant as these people somehow thing that their intransigence is part of a noble effort to stop a dictator when they are really partisan hacks undermining the people's elected representative.  Even though he worked for Trump who was elected by the people, he bragged that he was part of this noble resistance. Nikki Haley wrote that people as high up as the Secretary of State thought it was their duty to contain and control Trump, as though the people were too dumb to choose a President and executive policy.

Trump is draining a swamp that fights back on a constant basis, so comparing him to a stronger fighter figure and using a specific scripture where he is fighting the elites of his day is a good comparison.

Most who object to the comparison do so because of their political opposition to Trump. But they are doing so by ignoring the narrow comparison above, and instead use the hagiographic depiction of him as a military stud muffin that ignores the real critiques of Moroni.

The political opponents of Trump should realize that the political opponents of Moroni could credibly make even worse arguments against the latter. They could say he was an angry individual that preemptively seized territory in a time of peace, relied upon deception to win his battles, rejected peace offers to instead call his interlocuter a child of Hell and then threaten to arm child soldiers and pursue a war of extermination against that opponent. He threatened a coup against the government when it suited him and before he figured out all of the facts and seemed like a warmonger. While its not written down, my knowledge of military culture makes me suspect if we were on campaign with him we might find him laughing at the locker room humor similar to an Access Hollywood tape.

We rightly revere Captain Moroni as a spiritual hero. But like Jessica Rabbit, he was written that way. A sober examination of his life and critical assessment of his policies, and most importantly, his fighter attitude against the entrenched opposition to his single minded goals, suggest that Trump is a fighter comparable to Captain Moroni. 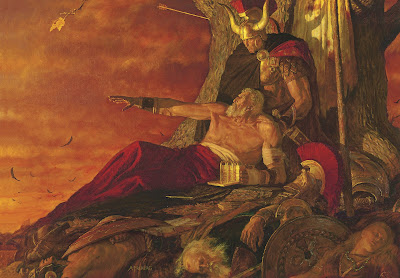 [I wrote the following in a facebook group about Mormon's young leadership.]

I teach a class on military leadership and one of the major questions I ask is whether the great leaders were born or trained. Many of the ancient commanders like Alexander the Great were amazing so it sure seems like they were born geniuses. But I must remind my students that those born in the elite and upper class had numerous advantages that others didn’t. Most people lived as farmers barely eking out a living. If they did have to fight they would be comfortable with farming and hunting implements but usually not swords. Think of David with his sling, which a shepherd would need often to ward off predators. Or see Mosiah 9:16. The elites on the other hand could spend their days training. Therefore, you see people like Ammon, the former crown prince, who could time and angle his defensive sword strokes in such a way that he could cut off arms. Mormon and Moroni clearly had language training as they could read and write. (Moroni provided a discursive explanation of why he wrote in one ancient, obscure language instead of another, Mormon 9:32-33.)  Alexander the Great was tutored by Aristotle and Mormon seems to have been a quick study, we don’t know from who, to receive his commission at the age of 10. Most farmers were often undernourished but the elites would be taller, healthier, and have the diets to build muscle mass.

I read Mormon 1-2 and saw many factors that aided his leadership. Like Alexander the Great he had many advantages that those from lesser families and bloodlines wouldn’t have. We might consider this an example of where much is given much is required and I think he and his son delivered. Mormon led the people through 70 years of wickedness and warfare and of course we have the book that bears his name.

Our young men and women living in the modern age need to take advantage of the education- physical, mental, and spiritual, that are available to everybody. They need to take their spiritual training seriously. Unfortunately, we seem to be a sedentary society that doesn’t train our minds or bodies. Instead of mental gymnasts we seem to be mental couch potatoes. We eat spiritual Twinkies instead of diving into the hard work of really understanding and applying the scriptures. We join the angry mob in cancelling people without considering how the media and small groups of strident jerks lead us around by the nose. I think Mormon would be ashamed at how we squander all the many gifts and tools available to the least of us that used to be the luxury of a few.