The Atomic Bombing Was Necessary and Justified 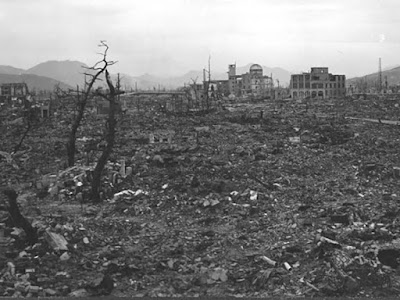 August 6th marks the dubious day in 1945 when America became the only power to use a nuclear bomb. This continues to spark controversy. There was a great deal of racial animus during the war with both sides holding disdainful views of the other.[1] Using an area effect weapon that didn’t distinguish between civilians and military targets invites condemnation.[2] The lack of military targets in Hiroshima and the dubious effectiveness of the bomb makes some people say this was terrorism.[3] After all, the Strategic Bombing survey revealing that the trains ran normally a mere two days later and this was often considered a way to stun the Japanese into surrendering and impress the Russians with the viability of the program.[4] Plus, there were supposedly peace feelers from the Japanese that made this completely unnecessary. These are all extremely flawed arguments that don’t accurately reflect the historical context, and seem like excuses to blame instead of understand.

The strongest attacks seem to be the peace overtures. This theory argues that the Japanese were ready for peace and only block headed generals kept the war going.  These were detailed by a revisionist historian, Gar Alperowitz and thus come long after the fact when it became more fashionable to search and promulgate these theories.[5] More importantly, they cherry pick some information and leave out much more important events that shows these peace feelers were completely impotent and the U.S. was correct when they disregarded them.

The best evidence against this theory comes after the Japanese emperor’s decision to surrender. After the bombs dropped and the emperor wanted peace the military challenged and almost reversed the decision through a military coup. It’s incredibly unlikely that minor officials would have produced peace when the atomically convinced emperor almost couldn’t. Let me stress, even AFTER the atomic bomb dropped there were significant factions in Japan that wanted to keep fighting. Peace was not possible before the bombs were dropped. Plus, American willingness to negotiate before the bombs would have emboldened the Japanese and aggressive army generals to think that more fighting would have gotten them more concessions.

Other critics quote leaders who sound authoritative but really aren’t. One example comes from Eisenhower who said: [I believe] that Japan was already defeated and that dropping the bomb was completely unnecessary…[6]

But with all due respect to Eisenhower and other generals cherry picked for opposing nuclear weapons, he was thousands of miles and away and was not privy to the intelligence and decision-making councils that led to it. It would be like Admiral Nimitz second guessing Eisenhower’s decision to stop at the Elbe. Eisenhower is a particularly odd choice for opposing nuclear weapons since his New Look military relied so heavily on nukes and spooks.[7]

Other critics were more vocal against nuclear weapons because they were delivered by bombers and this helped Curtis LeMay argue for the creation of an independent Airforce. In turn, this would take resources and prestige away from the Navy and Army chiefs, who were incredibly territorial and wanted the air corps assets divided between them.[8] Their opposition had little to do with the qualms of modern pacifists and posting quotes from them ignores the historical context from which they were produced.

The sad truth is that the Japanese would not surrender without the atomic bomb dropping or millions (of Americans, Japanese, and Chinese) dying from an invasion. An estimated two hundred thousand Chinese a month were dying at this point in the war. The Japanese launched the Ichigo offensive in late 1944 which was comparable in size and scope to the German invasion of the Soviet Union.[9] An invasion by American forces on the Japanese homeland would have skyrocketed those figures.

There was the option not to fight which would have left China and much of Asia in the hands of a regime as bad as Hitler’s. You also have to wonder how long they would have felt comfortable with the U.S. in Hawaii so they would probably have attacked America again anyway. The U.S. could have continued to bomb them. The firebombing of Tokyo and conventional attacks actually caused more deaths than the nuclear bombs so that couldn’t have been a better option.

The U.S. could have blockaded the country. Scholars argue that the U.S. had already destroyed much of Japanese shipping and merchant marine by August 1945,[10] and this may have been what Eisenhower meant by already defeating Japan, but then America would have to wait for the country to starve to death. That would have caused more deaths and in a slow manner arguably worse than two nuclear bombings. It also would have given the Japanese time to kill more Chinese soldiers and civilians. So between deaths from famine and deaths from the Greater East Asian War that option would have killed millions more. Even then, any peace offering from the Emperor would have likely faced a coup just like the surrender after the atomic bombings.

Dropping the atomic bomb quickly ended the war which prevented the Soviets from invading as well. The first atomic bomb was dropped literally the day after Stalin finalized plans to invade Japan and he invaded a a day after the second bombing. We saw how well Eastern Europeans were treated show trials, mass deportations to the gulags, the Soviet army’s refusal to help the free Poles in the Battle of Warsaw etc., so that wasn’t a good option. You can easily argue that the Japanese Constitution and rebuilding under MacArthur was far preferable to Soviet occupation.

After looking at the other options and strategic context in late 1945, the decision to drop the bomb was moral and justified. In fact, ending the war at about 170,000 deaths compared to the abject blood bath that awaited all sides is the reason why the allied leaders considered this weapon a godsend. The same prominent ethicist that condemned the bomb also said that ending the war swiftly with a minimum of causalities is the greatest kindness a leader could offer.[11]  Secretary of State Henry Stimson exemplified this idea when he said: My chief purpose was to end the war in victory with the least possible cost in the lives of the men in the armies which I had helped to raise. In the light of the alternatives which, on a fair estimate, were open to us I believe that no man, in our position and subject to our responsibilities, holding in his hands a weapon of such possibilities for accomplishing this purpose and saving those lives, could have failed to use it and afterwards looked his countrymen in the face.[12]

Thus, every other alternative was far worse, but you have your pacifist, blame America, soldiers are barbaric Nazis storyline. THAT is the made up history. Again, considering every option and the context of their war the dropping of atomic weapons was justified and necessary. I hope you can use this as a resource the next time someone attacks America for this eminently defensible action.

I work as a freelance writer. If you found value in this work please consider donating using the paypal button below, or purchase one of my books using the link to your top left.

[4] The United States Strategic Bombing Survey: Summary Report: 24.  Though it should be noted that Nagasaki was home to one of the most important military garrisons and was a foremost military shipping depot, and thus remained a valid military target. The United States Strategic Bombing Survey: The Effect of the Atomic Bombs on Hiroshima and Nagasaki, 6.  https://docs.rwu.edu/cgi/viewcontent.cgi?article=1000&context=rwu_ebooks

[5] Gar Alperovitz, The Decision to Use the Atomic Bomb, (Vintage Books: 2010). https://mises.org/library/hiroshima-myth

Posted by Morgan Deane at 1:22 PM No comments: