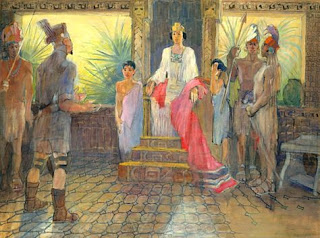 I'm proud to present my review of Proclaim Peace! The whole thing is too long to repost on this blog but see the whole thing here. The following is a few thoughts I had on its release:

What I found is that Latter Day Saints usually don't think about these matters that much. They have some gut reactions and at most, they add some new scriptures to what is a very old debate. But very few have read the great thinkers who informed the debate. Most people probably think Francisco Suarez is a nice place to visit in Mexico. As a result the scriptures they cite, even the new ones that seem clear, are asserted in isolation from other verses and from that rich tradition, which makes the ethic weak and unconvincing.

All of that occurred in the book I reviewed. They have thought through their position more than most, but mostly as a way to have Mormons, mostly liberal scholars like themselves, be accepted into the pacifist club, instead of really developing a broad and comprehensive ethic using restoration texts.

So on that note you can consider this review a sneak preview of the book I've got coming out on just war. As you can read below, I use much more than the preaching of Ammon and section 98. I never really considered myself an ethicist. But I've been trained by the best, from Sunzi, to Francisco Vitoria to Mormon so here is it is. Please like, read, and share.
Posted by Morgan Deane at 3:58 PM No comments: