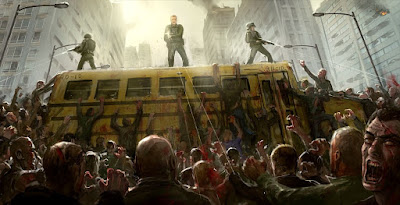 The former high school buzzed with activity. The office now processed new recruits. The gym and its showers were the main living areas. A field of roped off areas, cots, and duffel bags filled with uniforms and scared recruits. Captain Deane walked down the hallway and the rest of the rooms were just as chaotic. Filled with supplies like the new, simple, unjammable rifles, and the lobo. The E tool handle combined with an axes hand that could take of the heads or lobotomize the zombies. He smelled a faint whiff of dinner coming from the lunchroom and suppressed a smile of Chris Farley dressed up as a lunch lady. He finally made it to the general’s lounge. Of course, he took the teacher’s lounge, which had the few nice pieces of furniture. Deane doubted he could convince the general they needed education, even while bivouacked at a school. They were scheduled to march on Santa Fe and began to roll back the zombie menace from the Mountain West safe zone in one week. Many of the kids in there didn’t even know how to hold their weapons.

The general dismissed the officers in front of him and gave Deane an annoyed look. This starts well Deane thought.

“We don’t have time for books.” The general said. “We are due to start marching in a week, what are you going to teach them that is so important?”

The general Raj Singh, the Tiger of Delhi showed the way to defeat zombies was a square formation that recalled British firing lines. This was a common way to increase fire. When the British failed to form their lines, such as the Battle of Isandlwana they ran out of ammunition they were overwhelmed by swarms of Zulus. Sounds like the Battle of Yonkers right sir? Or the Chinese failure at Chongqing. In contrast, a much smaller group of cooks, medics, and various noncombatants at Rorke’s Drift formed a square, distributed ammunition, and defeated a much larger Zulu force. We need to teach our small unit leaders the importance of proper tactics. By reading Herodotus, we can read a small group of three hundred Spartans held off a million Persians.  We need to learn how discipline, like the Spartans, or cooks at Rorke’s drift used discipline, holding together in a line can defeat much larger forces.

Small unit commanders will have to make a multitude of decisions with lives on the line. If they survived this far, they already know that, but they have riflemen in the military under a US flag so what they do, and how we win the war for humanity matters. What number of casualties are acceptable when you send soldiers on a mission?  This applies to those barely adults we have sitting in the gym, but also to the civilians that happen to be near a battle. If we lure a zombie horde to our firing line like Hope, do we have a responsibility to clear out civilians from the area, even if it risks more combat deaths? At what point is it acceptable to lose a certain amount of men in calling a retreat? We will encounter civilian areas that have been under siege (see below) since the great panic and the food riots, how will we judge their use of criminals as human shields?  We will also face various warlords and LAMOEs (Last man on earth, pronounced Lame-O) out in the wild requiring us to know a variety of small unit tactics and good moral judgement. A good introduction on the subject is Michael Walzer’s Just and Unjust Wars. Walzer answers questions like should soldiers take extra risks, calling for civilians in a cellar before tossing a grenade, or flying daylight bombing missions to better aim and avoid missing military targets and bombing civilian ones. The doctrine of military necessity describes how moral standards can be set aside during times of war when disaster is a worse alternative than whatever moral sin is being contemplated. Our small unit leaders need to have a base of knowledge beyond whatever they saw in pop culture in making those decisions. Zombie war is more than shooting zombies and requires at least a basic grasp of wartime ethics.

The sieges of these towns are incredible. We held the critical Rocky Mountain passes during the winter and cleared the mountain west. We likely won’t face another siege, but we should still be ready.  The warlords who established themselves after the government fled might surround a patrol, counterattack our bases, and the tide might turn and we face another zombie horde. I hear the one around Hero City (formerly New York) numbers in the millions. And we aren’t exaggerating like Herodotus. Unit leaders need to know how to set up a perimeter and defense, guard areas of entry, prevent against sabotage from Quislings, how to react to breaches, and how to perform zombie specific tactics like thin the herd using fire attacks. There is a chapter in Sunzi on fire attacks that is often overlooked for people waxing eloquent about knowing thy enemy. The Romans were so merciless in their attacks and sparing survivors Josephus’ account of the Siege of Jerusalem is especially applicable to a city about to fall. The most comprehensive is from Aineias the Tactician, who writes from a bevy of personal experience and focuses exclusively on how to survive a siege.

“So you see sir, we can do that reading list using the books in the library in under a week.” Deane said.

The supply guys didn’t like it, but Deane got a room and a few hours each day for platoon leaders and above for a crash course in zombie reading.


The above material borrowed heavily from the World War Z universe and is a fun application of military history.

Posted by Morgan Deane at 2:51 PM No comments: