This is a comment I made over at the blog Millennial Star. Frequent readers of the blog will likely know these ideas already, since they are from my new book.

This is interesting concept. I don't have too much to add on the atonement aspect of scapegoating. I might ask about if we can see the modern understanding of scapegoating in the BoM. In what ways do people we traditionally see as villains might have legitimate complaints or exculpating factors?  John Welch did some of this in Legal Cases in the BoM.  He looked at the incident of Nehor, and found that his conviction wasn't for murder likely because there wasn't enough evidence of premeditation. There is also some evidence that Gideon was wearing armor and that he escalated the argument by threatening him with church discipline.   He goes on to describe how difficult political factors forced Alma into a difficult decision and innovative decisions to execute him for enforcing priest craft with the sword (Alma 1:12).

In my new book, Evil Gangs and Starving Widows: Reassessing the Book of Mormon, I find several similar examples. For example, if you compare Moroni's actions with that in the Amlicite rebellion, you see that Moroni was far more proactive, and some might even say militant in trying to stamp out the rebellion. This is understandable considering the events in Alma 1-4, but it had its own disastrous consequences.  Instead of a simple vote, Moroni and his men rushed forth with their armor to influence the voice of the people. I suggest this had militant overtones that we often miss. (Though people defying the government in Oregon don't seem to miss it.)  After Amalickiah was expelled, Moroni seized a great deal of Lamanite land during a time of peace. We can tell from Alma 47 that the Amalickiah was very smooth and likely made a great case for why the Nephites were dangerous.  I'm sure the Nephites seizing land in Alma 50 and expelling the Lamanite settlers only strengthened the arguments that Amalickiah had been making to the king and the people.  See, they're coming for you.

There are others items I could point to, but both of these items suggest its possible that Moroni's militant and preemptive actions helped precipitate the war and strengthened Amalickiah's arguments.  This is a somewhat controversial reading of the text that goes against what is popularly assumed. Yet if we are looking for scapegoats, mining the text for subtle clues, and accounting for the predisposition of the editor we find that Amalikiah might be one. Of course this doesn't excuse his evil machinations described in Alma 47. Yet Helaman’s servant stabbed an assassin after nighttime spying, and Nephi exposed another one in Helaman 2:6 and 9:6. Leaders in Nephite lands beat confessions out of criminals (Alma 14:17-22), and both Lamanites and Nephties attempted to poison each other with wine (Alma 55:13). The Nephites even tested the wine on their prisoners first (Alma 55: 31-32)! This is in addition to Moroni's preemptive war and indefinite detention of prisoners (Alma 51:19; Alma 62:4). The Nephites weren't strangers to cunning or militant actions with dubious morality.  Amalickiah is scapegoated as the villain even though we can see or infer where Moroni's actions helped lead to war.

Thanks for letting me talk about scapegoats! Good post.  [Thank you for reading. If you found value in this post please consider subscribing for three dollars a month or making a small lump sum donation using the bottoms at the bottom of the page.]
Posted by Morgan Deane at 8:32 PM No comments:

My Book is a Bestseller, Now Help the Second One!

My book was just named a best seller for the month of January!!!!  Matthew Roper at the Maxwell Institute says my research always contains “fresh ideas … worth reading.”  The reviewer on Amazon (David Spencer, a National Security Affairs specialist on insurgency) called it "well written, thought provoking, and required reading." Michael Collins called it, "insightful and enlightening." Award winning author David West called it a "brilliant tutorial for those who aren't quite at that 'Hugh Nibley understudy' level."

If you hadn't had a chance, make sure and get your copy today! Or, if you've already enjoyed it, buy a couple for your friends and share this on your page! 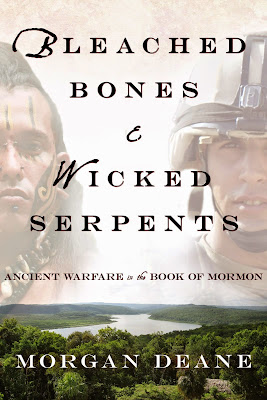 I'm working on a follow up tentatively titled, Evil Gangs and Starving Widows: A Revisionist History of the Book of Mormon. I asked a short time for reviewers on my second book. If you requested a copy of the manuscript please read it and get back to me shortly. If you are reading this for the first time and still want to help, please send me a message or leave a comment and I can send you a copy. I've gone through it several times and even added a new first chapter. I'm really excited and think this book will be even better than the first! But,I need to do some fine tuning first which is why I'm asking for reviewers.


I have several other projects in the works as well. One is called Mater is a Mormon: A Parent's Guide to LDS Principles in Film and I'm waiting to hear back from publishers concerning my partial manuscript. I'm also in discussion with a literary agent to publish a book on decisive battles in Chinese history. Thanks for reading.

[If you find value in this post and my work please considering subscribing or making a one time donation below. Thank you.]

Posted by Morgan Deane at 3:35 PM No comments: