I've got a few more great maps for my research into Mao's early insurgency. I'm the kind of guy that really enjoys looking at maps. In fact, I was at Deseret Industries today scouting out some Christmas presents and bought a large 24x36 Book of Mormon wall map. Its laminated so I want to buy some erasable markers and really dive into it with arrows and boxes.  Without further ado, here are the maps with a bit of explanation.
I often joked that I could tell the story of the Book of Mormon just using the pictures in the front of the book. But you can also do the same thing with a series of good maps. I really enjoyed discussing these maps and I hope you get a chance to read the article. I have a rough draft that needs reviewers, and I'm hoping to have a publication announcement soon. Thanks for reading.

Which map did you like the most and why? Which map do you think was most helpful?
Posted by Morgan Deane at 6:01 PM No comments:

I've been hard at work on several projects, including my research grant on Mao's leadership in the Communist insurgency.  Here is a map I might use that describes the terrain surrounding the Jianxgi Soviet. (Its labelled Kiangsi on the map.  Everything in Chinese history has at least two different spelling depending on the translation style used. Wade Giles has lots of dashes and apostrophes such as Sun-Tzu. Modern academia tends to use the Pinyin system that would say Sunzi.)

You'll see on the West side of the province is the Jinganshan (Chin-kang-shan) mountain range. After getting forced out by the combined efforts of local governors, Mao Zedong and Zhu De fled to the South Eastern part of the province with their capital in Juichin.  The entire province had few roads, weak government control, inaccessible terrain, and a history of rebellion that made them natural centers of strength for the Communists. In fact, part of my thesis argues that Mao deserves too much credit considering all the natural advantages they held. 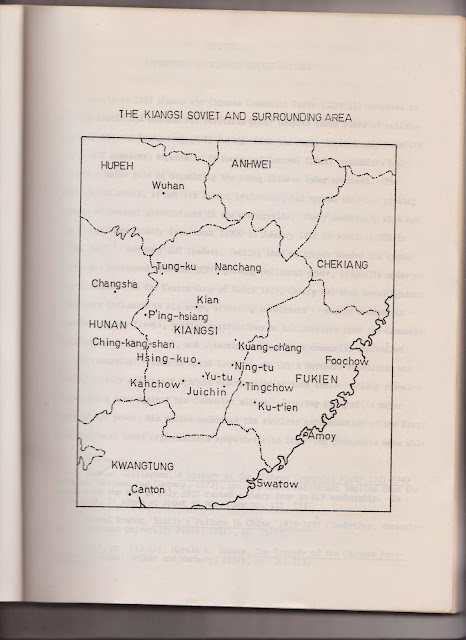 This doesn't have too much direct application to warfare in the Book of Mormon.  Though I have several ideas I would like to develop that apply directly. I want to examine the recruitment efforts of "rural vagabonds" into Communist armies.  The strategy of "luring into the deep" and the vigorous debates over urban and rural guerrilla strategies. You'll remember that the Gadianton Robbers started in the cities and then moved to the country side, and they also handily defeated Nephite armies in their mountain hideouts. (This could also lead to somewhat ironic comparisons with my earlier comments on the subject. I've certainly researched a great deal in six years since I wrote that post.)   I also want to look at  counter productive Nationalist strategies described as "climbing a tree to look for a fish," which compare to the discussion of self interested and abusive Nephite soldiers in the Book of Helaman.  I'm still working on getting my second book published, and starting a third on Mormon principles in film.  This is so much research that just writing the footnotes for one paper created a rather funny picture: 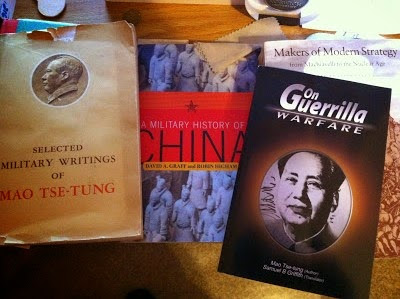 I hope to have links to my publications in the future! Thanks for reading!
Posted by Morgan Deane at 10:17 PM No comments: