Runnells Has an Absolutely Terrible Grasp of Warfare, Science, and Scholarship 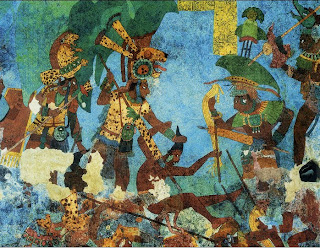 I found and then wrote something on facebook that would be useful if posted in a more lasting setting with sources. I never engaged that much with Runnels because he repeats criticisms (badly), that have been refuted elsewhere.  My personal interactions with him, while brief, were incredibly negative and make him seem odious.  Finally, as I say and show in my response below, he just doesn’t practice sound scholarship so his "critical" thoughts are often insipid and mind numbing.

Runnels wrote this in his section of the CES Letter on science:

Native Americans around this time did not have steel swords. Millions of dead natives would have left a trace. And according to historians,[Morgan’s note: this links to the incredibly scholarly reddit] hand to hand engagements did not last that long. We’re talking about a maximum of hours, not several days. Routing, sieges, and hunting down enemies would extend it, but that is not the story being told here. And the final one-on-one battle is so incredibly unlikely, especially when you get to the means of death. A beheaded man doing a pushup and trying to breathe? Not likely.

My response with added sources in parenthesis and footnotes: Just glancing at number 8 his points are superficial and don't engage the text or extant data. There are lots of points about steel. Personally based on the data I think the text refers to an extremely small number of weapons made out of meteoric iron (which is often compared to Damascus steel). And that’s ignoring the literary qualities that make the discussion of the sword of Shule and his band of followers sound more like Excalibur. He then conflates Ether 7:8-10 with the mention of millions in Ether 14-15. There are numerous differences and a rather great time span [25 rulers] between those chapters, so its lazy reading at best, and deliberately misreading at worst to assume there were millions or even more than a few steel swords that we should expect to find.

He has no clue about battlefield archaeology. Even one of the most studied battles at Hastings yields little direct evidence,[1] and historians still debate its exact location. Scholars recently "found" a lost army and so forth.

He then conflates the skirmish warfare of most Northern American tribes with far less social and political organization with the far more advanced cultures from Central America that had rather sophisticated cultures.[2] San Lorenzo and La Venta both had large populations and decent territorial control at a time when Rome was a still a collection of huts on a few hills, and this was centuries before the final battles of the Jaredites.

These societies could sustain rather long conflicts and battles. (For a general discussion of numbers and what Mesoamerican nations could field and sustain see this post.)  Moreover, medical studies show that failing to completely severing the head in one blow, such as by the last standing warrior in a three day battle, the body will go through upper body spasms.[3] Again, Runnels combines a narrow reading of the text with a shallow research to proclaim something as fact, when a careful reading of the text and better grasp of military history would suggest something else.

Overall, Runnells shows he is a dilettante that wouldn't recognize actual scholarship if a stele fell on him.

Thanks for reading. I work as a free lance author, if you found value in this work please consider donating using the pay pal buttons below, or by buying one of my publications.

Good question. I've been thinking about it more as well. Its a rather poor argument from Runnells to begin with. He has a very poor grasp of battle, including how they are defined and their length measured. He seems to think that battles just can't last very long, but a very short amount of research found many multi day battles. There are various reasons for this including partial sieges, stand offs between armies vying for position, pre and during battle maneuver, and chasing down defeated armies.

He attacks the Jaredite account for having battles that lasted all day for multiple days, but there are plenty of ancient accounts that record similar or multi day battles. The Battle of Fei River and Hulao Pass both had significant stand offs. This is where the armies skirmished a bit, but they both held defensive positions and were trying to see how they could break the opponents position. In the case of Fei River Fu Rong moved his soldiers which precipitated confusion, panic and retreat. The opposing soldiers read the signs in the ground and then pursued them and killed 70-80% of the army (which goes to large numbers of casualties as well.)

The Battle of Red Cliffs also featured a long pursuit through marshes and difficult terrain which might be considered a multi day battle.

The Battle of Hulao pass Li Shimin (ruling name Tang Taizong), made the opposing army hold their position for hours which made them avoid lunch and get stiff, both literally and in their tactical responses. He sent a cavalry force to see how the enemy reacted. When they were slow in responding and reacted fearfully Li Shimin sent a full attack. The pre battle maneuver, stand off, then resulting attack and chasing down the fleeing army and regrouping remnants took more than one day.

In the Sicilian Expedition the Athenian army tried to besiege Syracuse. But the Spartans landed an army in reinforcements and they fought a series of engagements and built counter reinforcements. This shows how classifying battles and determining their length can get confusing (especially when people deliberately apply a narrow definition to prove something doesn't fit with "science"). But they fought a bunch of mini battles, including one at night where one side painted themselves white to better facilitate command and control, and the cumulative total was a spring and summer of near constant fighting. One could almost say that they would "fight all day and conquer not." (Ether 15:15)

In the Battle of Gergovia Caesar fought Vercingetorix. The latter had a commanding defensive position so the former had to rely on a combination of maneuver, siege, fighting, and desperate battle to finally break the Gallic army. Again, its tough to time the individual actions as each element of the campaign (active battle, siege, maneuver, marching), blended into each other. Thats why Runnell's complaint is so odd and poorly stated.

Which is really what you get for relying on reddit when you make sweeping pronouncements on military history. Thats why I went back to the basics in discussing how societies sustain war. The more complex they are, the more they can raise armies and sustain them in the field, which means they can fight multiple campaigns and many battles. There were some tribes such as the Cree who for much of their history were hunter gatherers that fought very few of what we would call battles, most were skirmishes with a few soldiers. But others like the Aztecs raised large armies, sent them on long campaigns, and had battle after battle on those campaigns.

The Jaredites had a sophisticated society, as seen by places like La Venta and San Lorenzo, with large populations that could raise and support large armies. Those armies could then fight a series of engagements: some combinations of pre battle maneuver (Ether 15:8), stand offs (even exchanging messages Ether 15:18), chasing down fleeing armies (Ether 15:10), and then finally it seems they were two punch drunk fighters with nothing left in their armies to maneuver or negotiate and they just came to a place, likely with ritual importance (15:11) and strategic value. In fact, their four year stand off while they gathered strength reminded me of the build up to the Battle of Hulao. They didn't have the logistical strength to go any further, so they fought the pivotal battle (that with the army marching, then standoff, and then battle, then mopping up it all likely took longer than one day) all happened at one place.

Hope this helps. Runnells just really doesn't know what he is talking about in military history.


[1] John Sorenson, Mormon’s Codex, (Deseret Book, 2014), 383, fn 9.
[2] The best book I found on native warfare is David Jones, Native North America Armor, Shields, and Fortifications, (UT press, 2004.) You might also consider my book that compares and contrasts Cree warfare, which was much less organized, with Mayan warfare from the same time period in the late 4th century AD, Morgan Deane, From the Cree to Korea: A World History of Battle at 400 AD.)
[3] M. Gary Hadfield, “Neuropathology and the Scriptures,” Brigham Young University Studies 33 no. 2 (1993), 325.  See also Morgan Deane, "Experiencing Battle in the Book of Mormon," Interpreter a Journal of Mormon Scripture, 23 (2017), 237-252.

Posted by Morgan Deane at 4:07 PM No comments: