Preemptive War in the Book of Mormon: Part IV Alma 46-50 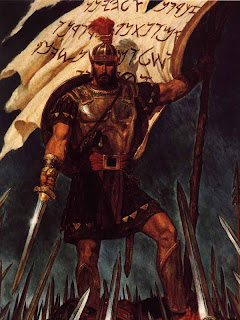 These scriptures are most commonly cited as a defense of preemptive war, though there are hidden details and consequences that should prevent easy use of the strategy.[1] As he prepared an ambush for Lamanite forces, Captain Moroni “thought it no sin that he should defend [the Nephites] by stratagem” (Alma 43:30). Moreover, Moroni preemptively attacked and tried to capture and presumably execute Amalickiah, based on the assumption that preventing his escape through military action would prevent a future war. As with Zeniff’s scouting, this action is presented without editorial dissent, and it is instead given as part of Moroni’s stellar resume. In the same chapter that described a period in their history that was “never happier,”[2] Moroni “cut off” the Lamanites living in the east and west wildernesses (Alma 50:11). This occurs during a time of supposed peace, but it could also be described as a lull or “cold war” between the First and Second Amalickiahite War.[3] Duane Boyce went further and created a just war theory out of Moroni’s preparations in Alma 48.[4] During an attack or in a time of strained peace, Moroni is lauded for his preemptive actions, ambushes, and active defense.

The major objection to this line of thinking from opponents of preemptive war comes from the idea that Amalickiah was just a dissenter. The argument then goes that these were wicked Nephites that caused “otherwise neutral” Lamanites to go to war with their propaganda.[5] But this breaks down upon further examination. The father of King Lamoni was hostile on site (Alma 20:10), and pretty quickly the king tried to kill Ammon (Alma 20:16). The leader of the Lamanites gives a pretty good indication of their general disdain and aggressiveness towards the Nephites, not their neutrality. Readers of the Book of Mormon have the advantage of knowing the rest of the story. Amalickiah went on to raise an army, provoke war, and invade in what was an intense and lasting conflict, so Moroni and Nephite leaders had ample cause to be concerned about his behavior. As will be discussed below, seizing and killing potential usurpers was a common practice for the Nephites and in Amalickiah’s case it was necessary.

Those who say these chapters don’t count as enough defense of preemptive war also point to the refusal of Lamanites to take up arms. But this wasn’t an indication of their peacefulness. As described above, their refusal is evidence that Nephite martial prowess and preemptive strikes could successfully dissuade an attack before it was launched.

Supporters of preemptive war who cite these verses also miss the factors that led to Moroni’s use of it in the first place, and they fail to look at the consequences of his actions. Both of these factors complicate the use of these scriptures in defense of preemptive war, though they do not nullify them. Moroni was old enough to remember the Amlicite war. In Alma 2:9 the Amlicites appointed Amlici as king. A short time later they attacked the land of Zarahemla and even joined the Lamanites. In response to these provocative actions the Nephites seemed defensive and reactionary. Alma 2:12 described how the Nephites knew the Amlicites intent and “prepared to meet them.” They did arm themselves, but the Nephites didn’t attack first or advance to meet the enemy, they didn’t try to position themselves to fight on advantageous terrain. Reinforcing the idea that a passive defense instead of preemptive attack places the defenders in a poor position when they do face battle, the Nephite army were in such a poor position that they had to make an armed crossing of a river (Alma 2:27). They almost didn’t make it to the battle, as the breathless report of their spies spurred them to a perilously tardy counter attack (Alma 2:23-24). With the hindsight gained from the Amlicite War, the Lamanite attack that resulted from Ammon’s missionary service, and possibly Zeniff’s aborted attack, of course Moroni preemptively chased down Amalickiah, and sought to “cut off” and “head” his army (Alma 46:30-32). In short, Moroni learned the lessons paid for in Nephite blood when they awaited Lamanite attack, forfeited the advantage of surprise, and had to reacted to Lamanites who took the initiative.

While Moroni’s active and premptive strategy didn’t repeat the past mistakes it possibly created new ones. The first negative consequence was the possible militarization of events by Moroni. The Nephites supporting Moroni rushed forward with their arms and armor to make these covenants (Alma 46:13, 21), which suggests Moroni escalated from warm disputes with fists to one side being armed for warfare (Alma 1:22). A politician with Amalickiah’s skill wouldn’t have needed much to make a strong case out of these actions to the Lamanite king. Nephite actions, including Moroni’s armed response, attack and attempted capture of Amalickiah and preemptive seizure of land in Alma 50 provided Amalickiah with mountains of ammunition. One can picture the shot in the arm Amalickiah received after making arguments to the Lamanite king (Alma 47:1) and his supporters received when they spoke the Lamanite people (Alma 48:1) when the Lamanite refugees from the wilderness came pouring into the land based upon Nephite preemptive action (Alma 50:7). The angry young men would have made especially ready recruits for his “wonderfully great” army (Alma 51:11).

Instead of neat conclusions based on a handful of verses, a close reading of the scriptures suggests no easy answers to today’s dilemmas in Moroni’s actions. He certainly seemed justified based upon the trauma of his youth. The brutal killing of Gideon, civil war, destruction of Ammonihah, capture of prisoners, near defeat, almost annihilation, many deaths, and famine of the Nephite realm during his youth made him rather aggressive in defending the Nephites. His actions were successful in defending the Nephite realm and they almost nipped the threat from Amalickiah in the bud. But they had severe unexamined consequences that may have exacerbated Nephite problems. The solution instead of dogmatic dismissals and overwrought denunciations of the practice is that it was a strategy with precedent and justification but was not a simple solution or cure all. It is possible that many of the negative consequences could have been avoided if Moroni had been completely successful in capturing in capturing Amalickiah, but the next example suggests preemptive action wouldn’t solve Nephite problems.

Thanks for reading. I work as a free lance author and providing quality ad free research for the last decade takes time. If you found value in this work please consider donating using the paypal button below or you can buy one of my books using the Amazon link in the top left. Thanks again.