Preemptive War in the Book of Mormon: Part II Omni 1 and Mosiah 9 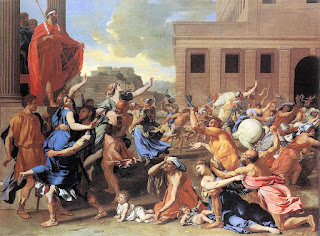 The very first instance of preemptive war occurs very shortly after the Nephites left the land of Nephi. They left in Omni 1:12, and by the end of the chapter they had already encountered “serious war and much bloodshed’ (Omni 1:24.) The most interesting verse for this study is Mosiah 9:1. Zeniff reported that he was sent as a spy that the Nephite armies might “come upon [the Lamanites] and destroy them.” This could be part of an ongoing war, but sounds more like a preemptive attack.  Zeniff’s desire to spare them in the latter half of the verse suggests the attack was already decided upon, and they were identifying the best way to execute the strike.  His account then already assumes that an army was gathered, equipped, trained, and an attack settled upon by leaders. Zeniff’s leadership of the scouting party, the account of his being learned in the language of the Nephites, and his later rescue by many friends and family, suggests he was an elite that may have taken part in the decision-making process. Besides the somewhat vague reference to serious war and bloodshed, there is no indication that this was a response to a series of attacks from Lamanites that required an offensive defensive strategy within a general defensive posture. This was simply a preemptive strike. The nature of this strike seemed so perfunctory to Zeniff, and Mormon who included Zeniff’s record, that there is no editorial comment condemning the launch of the attack. It is such an innocuous part of the story that it became part of the unspoken background of it.

His desire to abort the attack, his disagreement and subsequent fight with the Nephite leader becomes part an argument that places his righteous desire for peace against his “blood thirsty” and “austere” commander (Mosiah 9:2). Yet Zeniff quickly assured the reader that he was “over-zealous” (Mosiah 9:3), and perhaps unwise, in desiring to live peacefully next to the Lamanites. (His grandson quotes or seconds that idea in a speech to his then enslaved people [Mosiah 7:21].) Zeniff implied he was tricked by the “cunning” of the Lamanite King (Mosiah 9:10). Despite initially seeing the good in them, which made him want to abort the attack and resulted in blows over strategy, he foreshadowed the calamities of his decisions in verse 11 by citing rather typical ethnic stereotypes against the Lamanites and their desire to bring the people of the Zeniff into bondage (Mosiah 9:11.) His younger and more foolish self apparently had so much trust and so little cause to expect conflict that he didn’t build weapons or set guards (Mosiah 9:16, contrasted with Mosiah 10:1-2). He had to “invent” any manner of weapon (likely converted farming tools and hunting weapons) so his people could fight and only after the first battle did he make weapons and set guards. Eventually of course, the people of Limhi two generations later utterly failed to deliver themselves in three consecutive attacks (Mosiah 21:6, 7-8, 11-12), and ultimately needed divine intervention to escape their predicament.

All of this suggests a need to reassess both Zeniff’s description of the other Nephite commander as bloodthirsty and austere and the categorical dismissal of their attack. After all, Zeniff himself at least eventually came up with plenty of reasons why he was foolish, overzealous, and perhaps naïve, that we might consider he also repented of his decision to abort the attack on the Lamanites. This should have more weight because Zeniff was one of the few writers in the book to see the good in the Lamanites, but even he was quick to remind the reader of all his mistakes in judgement. Moreover, the colonists in subsequent generations were subjugated, and even believed that the Nephites had been exterminated (Mosiah 7:14). Arguably then, the other commander, who was initially called blood thirsty and austere, might have had a good argument that he was simply following a pre-approved and efficacious strategy to counter inevitable Lamanite aggression.

The Nephite leaders, Zeniff included, had plenty of reasons to believe the strategy had good merits. The failure to follow through with this attack led to all of the negative consequences above including defeat, subjugation, heavy taxation, failed counter attacks, and finally a need for divine rescue. Despite Zeniff opposing a “blood thirsty” leader the people of Limhi still had to fight. Having to fight anyway is bad enough, but because of their refusal to attack after Zeniff’s reconnoiter, they had to attack or try and break free of their slavery in much worse conditions. If Nephites were forced to fight and die anyway, it makes sense that it would have been more effective if they risked their lives when they had the advantage of a surprise attack and not the other way around (Mosiah 9:1 compared to v. 14). Zeniff’s regret over his actions and the desperate Nephite fights forced upon them, only in worse conditions after their aborted attack, combined with the lack of objection in the text suggests that this preemptive attack had a great deal of merit.

Thanks for reading. I work as a free lance author and providing ad free, high quality research takes time and effort. To support more of this research please consider donating using the paypal button below, or buy one of the books linked to above.
Posted by Morgan Deane at 4:19 PM