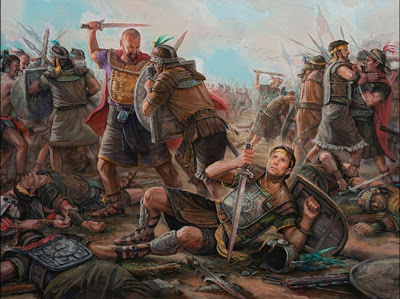 [An excerpt from my upcoming book on just warfare in the Book of Mormon.]

The text contains enough information to recreate the raids on scattered settlements that made a consolidation so needed and may have made a defense pact with the Gadiantons more attractive to the people than dying for the far away Nephite government. The people at this point in Nephite history had spread throughout the land and were likely in small settlements that had few or little soldiers (Helaman 3:3). When Mormon came from the sparse territories in the Northern lands, he was so impressed he thought the central lands had so many people they numbered the “sands of the sea” (Mormon 1:7). And even those built-up territories were susceptible to a quick attack (Helaman 1).

Upon seeing the attackers in the distance the farmers would have little time to react, even King Noah on his tower had little time to alert his people (Mosiah 19:6). Not too unlike their ancestors the people outside of the central lands would be out in the fields or with their flocks when they realized the danger (Mosiah 11:16-17). They would have to flee so quickly from their fields their pregnant women would be trampled (Helaman 15:2). When they reach their homes, they had a decision faced by peasants throughout time. The average peasant didn’t have much, but the prophets often criticized the people for their attempts to “get gain” (Helaman 6:8; 7:5), so they could try to hide whatever treasures they had and flee or fight (Helaman13:18-20).

Samuel made sure to point out that their spiritual loss was more important than their physical treasures, but it was a sign of the bankruptcy of both as he quickly moved on to the great physical destruction brought about by their wickedness (Helaman 13:21). If they tried to fight, their swords were “taken from [them] in the day we have sought them for battle,” useless against such a horde bent on destruction (13:34). Again, this reinforces the point that one’s spiritual state is more important than strategy as it was the wickedness that caused the people’s impotence. (The same people seemed more powerful when their imminent destruction brought them to their knees in prayer, 3 Nephi 4:8). The people faced swirling demons (Helaman 13:37), which could represent the chaotic orgy of death and destruction that surrounded the hapless peasants in a Gadianton attack that the people’s running, hiding, or fighting couldn’t stop.

Readers have focused on Samuel’s spiritual message. But Samuel’s speech wasn’t simply an exemplary sermon about Christ and the need for repentance. I argue that he took an event that was quite common, the raid of Gadianton robbers, and used the utter fear and despair felt by their victims to explain spiritual principles and drive home the need for repentance. Maybe there were even some refugees in Zarahemla listening to his speech. Much like Biblical writers, he took violent spiritual events that seemed to overwhelm society but used robbers instead of Babylon or Assyria.

I work as a free lance author. If you found value in this work please consider donating using the paypal button at the bottom of the page, or buy one of my books linked in the top left.

Posted by Morgan Deane at 12:09 PM No comments: