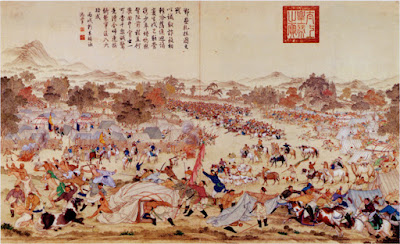 I’m working on new project tentatively titled, A Soldier in Armor Does not Bow: Classical Debates on War and Government Beyond Sun-Tzu.  Sunzi (Sun-Tzu) tends to overshadow the rest of the commentary on classic Chinese military theory. The translations are too many to count and just the famous ones include Giles, Griffith, Cleary and Sawyer. And this is before getting into various proliferating boutique editions sold at major book stores.

But this focus on Sunzi borders on obsession and it blinds the general public to the many more works in existences, hinders those with academic training in military theory from the rich potential of the rest of the corpus, and the texts beyond Sunzi are often ignored by the majority of scholars who specialize in these texts and instead focus their research on the ethical, metaphysical, and literary qualities inside them. Xunzi is an excellent example of this trend. He was one of the most influential and sophisticated philosophers in pre imperial China and is the subject of dozens of books and essays. Yet there is no work that devotes significant attention to Xunzi's military theories, despite the fact he thought the topic of armed conflict enough important to devote an entire treatise to it.

The project will take advantage of my academic study in Chinese military history, an extensive background in general military thought including both ancient and modern thinkers, and the increasing number of English translations of seminal volumes that remained to be studied.  These include new translations of the Mozi, the Dao De Jing, the Analects of Confucious (Kong Fuzi), Seven Military Classics, Huainanzi, Sun Bin’s Art of War, Shizi, Guanzi, Mencius, Xunzi, Yi Zhou Shu, the Pheasant Cap Master of Heguanzi and the so called "lost classics" of the Yellow Emperor. When combined with the existing the Book of Lord Shang, Han Feizi and fragments or excerpts from the works of thinkers like Shen Puhai and Jia Yi this becomes a sold corpus. Taken together they cover a broad spectrum of Chinese thought and debate among Confucianists, Legalists, Daoists, the methods of Shen Pu Hai and their various combinations and synthesis.

Despite being publicly available, some of them for close to 100 years, very little has been done to systematically assess and evaluate these texts. Focusing on Sunzi to the detriment of the rest of the military thought is a tragedy. That misplaced focus fails to recognize that moral questions that governments wrestled with. Sunzi’s focus on purely rational calculation obscures the debate around moral matters that many writers contend strengthened both the government and soldiers. In some places, Sunzi’s advice directly contradicts sound commands regarding the conducts of army towards civilians, and the treatment of soldiers. Important concepts such as shih and weighing (quan) are elaborated much more fully in other texts.  The misplaced focus also ignores the history of the China and its application. Many leaders such as those that unified China in the 2nd century BC and the Kaangxi Emperor of the late 18th century AD respectively used other theories and called the classics like Sunzi “worthless.”

As part of that project I’ve seen a good deal of material that can be applied to the Book of Mormon and our study of it.
1
Why Study? This quote supplies advice about the role of knowledge in sharpening oneself and its relationship to warfare.

Learning is like sharpening. Suppose fine copper from Mount Kunwu and excellent tin from zhufu are worked by the famous blacksmiths of Gan and Yue and forged into a sword. Yet if they do not use both fine and course whetstones on it, then when using it to stab it will not enter, and when using it to slash, it will not cut…Nowadays, people all know to sharpen swords, but no one knows to sharpen themselves. Learning is the sharpening of the self.[1]

If you change sharpen swords to being a jerk on social media it is even more insightful. Now that I think about it, this quote, “Nowadays, people all know how to be a jerk, but no one knows how to learn” sounds like something that would be posted on the archways at facebook.

2      The authorship of historic texts: The man named Guanzi is thought to have lived in the 7th century BC. But his writings weren’t complied until about 26BC and his writings contain a great deal of material that responds to contemporary debates in the late warring states period. This has led to debates among different theories that are repeated in some measure in regards to almost every text.

The two extremes range from it being written by Guanzi or entirely written by somebody else. The middle views are more nuanced and include a corpus of older material that was added by later scholars or disciples. Another theory is that writings from a certain school were written in Guanzi’s name or attributed to him by the editor of his works in 26BC. This means that different authors wrote texts that discussed good ministry, authoritative Confucianism, and good policies towards the people and the unknown authors sought more authority for their works by invoking Guanzi’s name, or it was a way to classify them and the Guanzi School simply became Guanzi.

This has the most application regarding the Book of Abraham. I’m basically familiar with the issues regarding the Book of Abraham though I can’t say exactly how much of the above about Guanzi applies to this. The LDS gospel topics essays says, “[Abraham] is the author not the copyist” which implies that the line, “by my own hand,” in the introduction is a bit more nuanced. This might inspire critics to say that apologists are stretching or twisting to explain away uncomfortable facts when I can read the same debate about almost 30 different ancient texts. So I can say it’s really pretty normal to assume that ancient writings have rather complicated provenance and the Book of Abraham, as an assumed ancient writing, is no different.

3       Anachronisms: This is a favorite hobby horse (or Tapir) of critics but it’s similarly flawed when viewed from a historical perspective. The one that popped out to me the most was an argument from Tai Kong. This text was supposedly written in the later Zhou Dynasty around the 10th century BC. But then this ancient Tai Kong directly addresses a specific problem to the latter Warring States Period:

“When the people are not engaged in agriculture and sericulture but instead give rein to their tempers and travel about as bravados, disdaining and transgressing the laws and prohibitions, not following the instructions of officials, it harms the king’s transforming influence.”[2]

These are the same types of individuals that legalists like Han Feizi criticized.[3] They were viewed as honorable people but they didn’t fight for the state and actually undermined it so they were often criticized by government officials.

The response to this isn’t that the book is a clear forgery that now has no use. Going back to point one the explanation depends on who you ask. But it could very well be that later writers added things to a core text which introduced the anachronisms. Most anti Mormon critics tend to move the book quickly into the total fraud category, but an alternate explanation is that this represents the long provenance of the book going through the hands of difference editors (such as Joseph Smith translating Mormon’s translation of Ether.)

4       Related to the anachronisms was the moral outrage over violence and how it contribution to the texts and how people viewed the authenticity of them:  Confucians such as Mencius were quick to disqualify texts like the Tai Kong over their anachronisms because its depiction of brutal violence, spy craft like corrupting with women, and revolutionary nature made it unsalable for Confucians. Sunzi was often criticized because he didn’t seem to care about morality like Confucians did. Guanzi, the good Confucian minister advocated for proper treatment of the people, Sunzi said cast them into hopeless situations in order to stimulate the greatest effort. Sunzi said that warfare was the greatest affair of state but many others would argue that it was the altars of state that was most important.[4]  To the utter horror of Confucian historians the Yi Zhou Shu included how a conquering ruler cut off over 1 million ears and captured another 3 million.[5]

The point is that editors tell the stories they want to and often make judgements about the veracity of documents based on their personal beliefs. These judgements can be seen by carefully looking at what is included and how it’s included. Before you start to say there I go again, this is the same methodology that Grant Hardy employed when he pointed out the long digression after Nephi comes back with the plates and similar inferences that can be made about Nephi’s actions.

Hardy discussed how Nephi came back from killing Laban and obtaining the plates. Instead of recording Lehi’s reactions it does something really unusual, it details the words of Sariah, and then it says how Lehi made an offering for sacrifice. By reading the text critically and looking at what was included and not included we might tentatively believe, according to Hardy, that Lehi did not approve of Nephi’s actions. The larger point is that a careful reading of the text suggests possible unintended consequences and actions that Mormon (once we leave the plates of Nephi) often tried to massage away from the text. This doesn’t hurt the text but should increase our appreciation of it.

5       Answering Questions that Weren’t Asked: One of the most rewarding aspects of my work is finding that the Book of Mormon actually answers great questions that I never asked until I started reading these Chinese texts. I’ve posted these previously on my blog so I won’t repeat them here. But you can find much more about battlefield morality and the role of ritual in camp.  I’ve got a paper based on this submitted for an upcoming conference so I hope I can present this to a larger audience.

Those are the major factors that apply to the Book of Mormon. My extensive readings and specific examples I provide are reasons why I find the criticisms of both anti Mormons and fundamentalists rather shallow. They often stem from a lack of knowledge and inappropriate use of the limited knowledge they do have. Its too often scholarship warped into a narrow pursuit, which is why I’m so excited about this book that will bring classical Chinese military theory to a much wider audience.

Thanks for reading. I work as a freelance author so if found value in this work please consider donating using the paypal button below or buying one of my books. It will help me continue my research so I can bring you more of these. Thank you!
*********

Posted by Morgan Deane at 5:22 PM No comments: