[I wrote the following in application to the upcoming Mormon Theology Seminar.  I faced tough competition and wasn't selected, but I hope to pursue these ideas in the future.  I was limited to 750 words and had to be incredibly brief.]

Hugh Nibley and John Tvedtness described the colophon in First Nephi 1:2-3.[1] These colophons served as ancient seal of approval or copyright. Noel Reynolds argued persuasively that Nephi’s record is the beginning of a political text that justified Nephi’s rule over his brothers, and Nephite supremacy over the Lamanites.[2]  Conversely, then, colophon like statements from Nephite dissenters and opponents reveal counter and subversive political narratives. The letter from the Gadianton Robber, Giddianhi, in Third Nephi 3: 9-10 is particularly revealing.  His entire letter, in addition to having a colophon similar to Nephi’s, used and subverted the Nephite foundational narrative to enhance the power of his pre-invasion propaganda.
Nephi says that his words are true, and that he makes them according to the “learning of his father, [consisting] of the learning of the Jews and language of the Egyptians.” (1 Nephi 1: 3) Giddianhi references his position as governor of his society, “which society and works thereof I know to be good, and they are of an ancient date and have been handed down to us.” (3 Nephi 3: 9) So both writers recognized their position in society, testified of its truth or goodness, and referenced the heritage that influenced their writings.
But a detailed comparison of the two chapters reveals even deeper connections.  An often quoted modern phrase is based on the “tender mercies” found in First Nephi 1:20. In contrast to the tender mercies of the Lord described by Nephi, Giddianhi claimed that he wrote his letter and sealed it with his own hand, “feeling for your welfare, because of the firmness in that which you believe to be right, and your noble spirit in the field of battle.”(3 Nephi 3:5) The leader Giddianhi claimed that the Nephite’s firm faith moved him to offer mercy, and the Gadianton leader will grant them a reprieve, or deliver them from their impending destruction.  So it is possible that Giddianhi recalled the Nephite’s foundational narrative with a twist to enhance his claim to leadership. The robber offered his tender mercies instead of God’s. Many ancient rulers cast themselves as God, part God, or the only approved conduit for God’s power. So what seemed like fake empathy from a slimy politician instead reads more like an exchange between Themistocles and Xerxes during the second Persian Invasion.
The verses before the tender mercies described the preaching of Lehi to the inhabitants of Jerusalem. In that preaching Lehi “plainly” warned of their destruction and described their means of their escape.  (First Nephi 1:18-19)  In contrast, the Nephites were offered a chance to know their secret works, and if accepted, Giddianhi offered an oath that they wouldn’t be destroyed but accepted as brothers. (3 Nephi 3: 8)  Again, this is a slight twist of the Nephite belief system. As modern members repeatedly hear, the “strict heed” a member gives to their oaths and covenants prevents their destruction. Thus, entering into an oath with the robbers would prevent the Nephite destruction; just as the inhabitants of Jerusalem could escape destruction from the Babylonians by obeying God’s word given to Lehi. The chief Governor reinforced the concept of deliverance through honoring covenants after Lachoneus rejected Giddanhi’s offer and instead commanded the Nephites to pray, and prophesied to them until they repented. (3 Nephi 3: 12, 16).
In conclusion, Giddanhi subverted the Nephite political narrative from First Nephi 1 to enhance the pre-invasion propaganda within his letter.  He sounded merciful in response to Nephite firmness in battle, by suggesting that he instead of God was the source of tender mercies. He prophesied of their destruction in 30 days, which recalled Lehi’s fulfilled prophecy Jerusalem’s destruction. (Nephite prophets used this fulfilled prophecy to bolster their case on other occasions. see Helaman 8:21.) Finally he argued the Nephite’s only escape was to accept his oath and be initiated into his society. Subverting Nephi’s political narrative 600 years later begins to show how Nephi’s colophon and remaining writing established a ruling ideology. This subversion adds sophistication and power to Giddianhi’s arguments, and suggests one reason why his threat remained so potent and seductive.

You may read an expanded version of this argument in my Reassessing the Book of Mormon.
*****

Posted by Morgan Deane at 7:12 PM No comments: 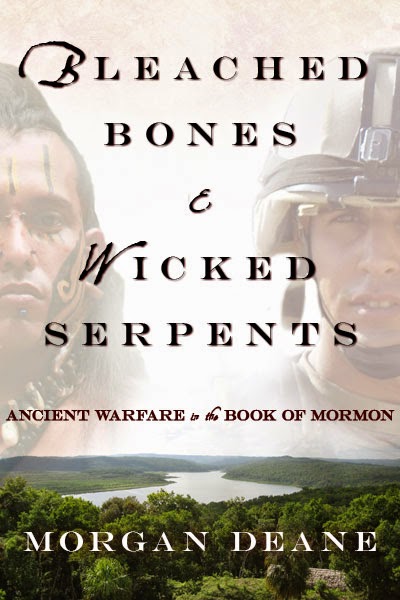 Cross posted from Arsenal of Vencie﻿
Morgan Deane, a military historian and former Marine sustains the authenticity of the Book of Mormon as an ancient document and shows how text contains a strong and distinctive voice on military matters that should be taken seriously by modern readers and even policy makers and generals.  Through a Hugh Nibley like command of ancient societies from Mesoamerica, China, and Rome, as well as a grasp of military theory from Clausewitz to Sun-Tzu he expands upon the Jaredite civil war, the face of battle, logistics, ethno-religious conflict, the political dimensions of conflict and insurgency, and strategy.  He specifically valorizes Captain Moroni against a rise in attacks against his character, presents a Nephite and Latter Day Saint just war theory, and shows how The Book of Mormon defends the use pre-emptive war. In a world filled with strife and conflict, Bleached Bones and Wicked Serpents will help the reader understand the context and society in which the Nephites lived…and died, and provide critical tools to evaluate modern military issues ranging from how to understand the threat posed by terrorists to assessing the wisdom of military action.


Morgan Deane earned degrees in history from Southern Virginia and Norwich University. He served in the Marine Corps as an infantry riflemen, squad leader and intelligence analyst. He is the author of “Forming the Formless: Sun-Tzu and the Military Logic of Ender Wiggins,” and “Offensive Warfare in The Book of Mormon and a Defense of the Bush Doctrine.” He has authored numerous articles for the Encyclopedias of Military Philosophy and Russia at War, and contributed to text books on American and World History. Currently he teaches history at Brigham Young University-Idaho, American Military University, and elsewhere; and he is a PhD student at Kings College London. He and his daughter Lorraine live in Las Vegas, Nevada.
Posted by Morgan Deane at 5:14 PM 2 comments: