This is the my most recent publication from Opslens. I published between two and four articles a week on that site so if you like my writing make sure to check it regularly. I reprint items of particular importance here.

Politicians and activists complain that Columbus Day celebrates the genocide of Native Americans. This evokes a good deal of emotion and the idea of genocide is often discussed around Columbus Day and Thanksgiving, but it’s also brought up in various contemporary political debates. Yet the use of the term genocide is not accurate. It contorts the definition of genocide, uses it for its emotional value, and obscures the historical nature of European and Native American interaction.

The death of so many Native American was tragic, and certainly judging by today’s standards the Europeans who killed them were racist. That reasoning uses the presentism fallacy, which judges past figures based on modern notions of morality. I like to remind liberals that the Barack Obama of 2013 held a position on gay marriage that the modern left would find incredibly offensive and homophobic.

If one of the primary leaders of the left held a position just five years ago that is considered wrong today, it can be expected that people from 500 years ago certainly did. But it was the introduction of deadly diseases into Native American cultures that killed far more natives in a quicker time than most other causes, yet this was not a deliberate and diabolical plan of Europeans. There was no germ warfare against the natives, just tragic cross-cultural contact.

The natives didn’t have the same political race consciousness that modern people do. Many Native American tribes actually fought on the side of Europeans against other tribes. The Aztec practice of human sacrifice both angered and frightened their neighbors who quickly joined Cortez. In fact, not only did natives join European fights, but some scholars such as Ross Hassig posit that the natives actually used the Europeans to settle their political scores. The Five Nations of the Iroquois joined the British to fight the Americans, and the French and Indian War featured natives allied with the French.

If we are to believe the modern political arguments, these were race traitors serving foreign masters in their own destruction. In reality, each tribe acted independently according to their best interests, which sometimes meant allying with Europeans and exterminating bordering native tribes. Many tribes such as the Plains Cree and Comanche established their own empires in the West by subjugating, killing, and enslaving their Indian neighbors. The concept of noble Native Americans fighting the rapacious white men is a modern invention, often used to inspire guilt in political opponents (like the mayor of San Juan did last week), but doesn’t accurately reflect history. 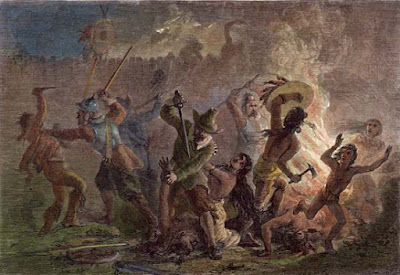 In addition to the Europeans having native allies and vice versa, the Europeans themselves were not a monolithic whole. The Conquistadors just happened to be the most fanatic religionists from Europe that encountered an empire with some of the continent’s bloodiest rituals. Their reaction doesn’t mean every other European power acted the same way. In fact, the Spanish rulers outlawed slavery, and there were many Spanish monks that spent their entire lives ministering to the Indians, learning their ways, providing medical care, and writing down their customs.

The actions of the 16th century Spanish should be separated from 19thcentury Americans. There was not an organized and systematic campaign that called for their extermination similar to Hitler or Milosevic. In contrast to Nazis and Serbian killing squads, the fall of natives in America was a series of sad events over 500 years that resulted in their current situation.

The Spanish were religious zealots, different from the French whose search for furs led to excessive hunting, and both were different from the English who wanted valuable farming lands. Whenever two people come into contact they have a series of mutually inspired changes and responses. The Europeans established missions or trading posts, or planted new crops. Some groups of natives adopted horses and used gunpowder (and often used those items to exterminate neighboring tribes). Different groups of people interacted with others differently depending on their wants and needs.

Unfortunately, the loss of population from disease and the superior numbers of sedentary farmers compared to semi nomadic hunters meant that the Europeans pushed out native cultures. This trend accelerated in the North American West after the American Civil War due to the railroad. But even then it was not a monolithic and organized campaign of extermination, just the extension and sad conclusion of centuries of interaction.

All of these reasons mean that term genocide is used because of its emotional value and not because of its accuracy. Many of the modern users of the word have a much politicized version of history that generally views dead white men as the villains. This over-politicization is misguided on several fronts. In addition to the needless simplification of history described above, the concept of whiteness is extremely fluid.

For example, when Southern and Eastern Europeans migrated in large numbers in the late 19th century, Americans reacted with fear and horror that their country was being taken over by dark skinned Italians, Spaniards, and Poles who had values that were not compatible with Western ideals. But Columbus the Italian and Cortez the Spaniard are the individuals that first started this supposed genocide. In other words, they weren’t white enough to settle in the USA during the late 19th century, but liberal academics believe the 16th century Spanish and Italians were the epitome of white when they supposedly started the genocide against the natives.

The Native Americans can point to a long list of unfortunate events and even abuses. Their plight throughout the years has often been incredibly tragic. They lost huge numbers of people to disease the first few generations after contact with the Europeans. They were also part of a competition between and among nations that included natives allying with the Europeans and vice versa. The attacks on the natives were part of a rather common pattern of warfare that Europeans used against each other, and that the natives used among and between each other.

So, on the next Columbus day, call for indigenous day, or politicized racial attack on white people, it’s important not to be afraid of the political cudgel of misused history, but to respond with a nuanced and thorough understanding of it that says this was not genocide against Native Americans and that there is plenty to celebrate about Columbus.

Thanks for reading. I work as a free lance writer. If you found value in this work please consider donating using one of the pay pal buttons below.
Posted by Morgan Deane at 3:04 PM