When Renouncing War is a Sin: Section 98, Mormon 4, and the Heart of Just War 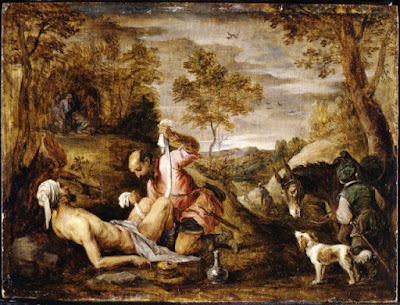 Section 98 is most famous for its command to renounce war and proclaim peace. Yet at the same we have righteous Latter-Day Saints that participate in war. This makes it important to consider how one can be peaceful, or renounce war, while wielding a sword. Then this post shows then shows a rote recitation of the standard of peace, can bury important ideas in the scriptures and ideas concerning when we can and should use force.[1] The Nephites in Mormon 3 were the most justified to wage war, on paper, but their wicked hearts meant that any justification from scripture remained hollow and it provides a warning for modern members when discussing the use of force.

The apparent contradiction between peace and wielding the sword erases when one considers the heart. We should be peaceful and renounce war. But with a heart filled with love we take the Good Samaritan as our example. We consider how if we came upon the beaten traveler in the middle of the robbery, we would not lift his cheek so the other cheek could be beaten.[2] We would fight to protect him. This is a common thought about Christian fathers, clearly described in the Book of Mormon (Alma 43:47), and discussed extensively by Christian thinkers as I summarized here.

Similarly, while the period is difficult to study because of its wickedness, the Book of Mormon and the Nephites in the terminal period had many just reasons for fighting.  Nephites were fighting for their home and families. At one point that motivation led them to a victory in battle (Mormon 2:3). By Mormon 3 the people had lost the Land of Zarahemla. A loss of a territory that had been theirs for hundreds of years must have been shocking to the Nephites and constituted a historically recognized justification for war.[3]  The predations of the Lamanites were well known (Alma 48:24; Mormon 9), and the suffering people would constitute the poor and the needy cited in Psalms, and subsequently quoted by the medieval Thomas Aquinas as a reason for force.[4] In short, the Nephite rights of life, home and family were threatened which seems like a classic justification for warfare seen through exemplars like Captain Moroni.

Most readers of the Book of Mormon take Mormon’s refusal to lead the Nephites in their offensive as a blanket probation against offensive warfare (Mormon 3:11).[5] What is left out is the Nephite wickedness and gross spiritual behavior in verses 9 and 10 that were the actual and overlooked causes for Mormon’s refusal and this causes modern readers to over rely on rote recitation of chapters like D&C 98.

Mormon 3 record the sins of the soldiers as boasting, swearing, and avenging themselves in the blood of their enemy (Mormon 3:9-10).  Mormon 3:15 also seems to prohibit preemptive war. However, the real sin recorded by Mormon was not the offensive tactics but rather the bloodlust and vengeance that dictated Nephite strategy (v. 14). One might also say it was their false oath (to a false god?) in Mormon 3:10 that finally forced Mormon into his utter refusal. The Nephites were a people whose day of grace had passed (Mormon 2:15), and though they struggled on they were lost because of their hearts.

We might consider the juxtaposition of two scriptures to show the difference a heart makes in determining strategy. The Nephites soldiers in this period cursed God, wished to die, but struggled on. This compared to the righteous People of Ammon, who praised God, wished to live, but allowed themselves to be killed (Mormon 2:14; Alma 24:21). The spiritual state of the Nephites that made Mormon refuse to lead them were tormented, conflicted, and unwilling to cede control of their lives. The proper attitudes were shown by the People of Ammon who praised God, wanted to do what was just, but found peace in knowing they could only do their best and might die anyway.[6]

The key to the denunciation wasn’t the strategy or citing favorite scriptures like renouncing war but the hearts of the people making that strategy. In that spiritual state of the tormented and fallen Nephites they were doomed no matter which strategy they pursued. (They lost on the defensive too.) Yet many people use those verses not to condemn the Nephite wickedness but instead to condemn the strategy.

This often means that many people proclaim Section 98 as their standard but can still never arrive at a just strategy. They renounce war and proclaim peace, they cite verses about the first and second offense, but don’t consider the command to “forsake their sins, and their wicked ways, [and] the pride of their hearts” just a few verses before that (v.20). Most importantly, they might see misfortune in the news and underreact by quoting section 98. Raped Yadizi women, genocide, active terrorists, Afghans so terrified they hang onto planes, and instead of supporting the use of force to stop it they quote scriptures about love.

But without a loving heart they don’t consider the little girls suffering tremendous abuse, the millions suffering around the world, and the millions that could die in a terrorist attack, and feel that the love of God, and love for neighbor shown by the Good Samaritan should compel them to use force to stop that injustice. They have their standard, and they need no other. The verses in section 98 becomes an excuse to ignore suffering around the world when we have the power and duty to use force in the protection of the weak, abused, and suffering.  Without the key principle those who cite section 98 don’t realize that if we have the love of God in our hearts, we shouldn’t be afraid or unwilling to act around the world to deliver the poor and needy (Psalms 82:4).

After looking at the callous refusal to help compared to the heart felt love we should have, God might tell many of these people: “If a ruler sheaths their sword and keep their hands unsullied by blood, while the wicked roam about massacring and slaughtering, then so far from reaping praise for their goodness and justice, they make themselves guilty of the greatest possible injustice.”[7] Or to paraphrase Alma 34:28: “if ye do not any of these [actions to help those suffering], behold, your [love] is vain, and availeth you nothing, and ye are as hypocrites who do deny the faith.”

Section 98 is important, but it’s more important that we not lose sight of having a peaceful and loving heart. And that love should compel us to action when we witness suffering and have the power to stop it, not be used as an excuse to witness more suffering. We have an example of Nephites that waged sinful war despite fulfilling scripture because of their wicked hearts, and we must be careful not to be so devoted to our favorite scripture bumper stickers, that we ignore the love for our neighbor that should inspire just war.

I work as a free lance writer. If you found value in this work please consider donating to help me create more quality research and ad free content. You can donate using the paypal button at the bottom of the page or buy one of my books using the link at the top left.

[1] Adapted from, The Book of Mormon and the Historical Just War Tradition, forthcoming.

[6] Some might consider this an example of the primacy of pacifism, but this was a special case due to the wickedness of the people avoiding the sword. Duane Boyce, “The Ammonites were not Pacifists,” Interpreter: A Journal of Latter-day Saint Faith and Scholarship 20 (2016): 293-313.