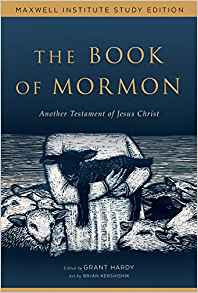 One of the slightest controversies in Book of Mormon studies includes the concept of making the text easier or harder. Readers at Deseret Book often see various scriptures “made easy,” while scholars enjoy what Richard Bushman called wrestling with important questions, or making things harder. The unique joy of the Maxwell Institute Study Edition of the Book of Mormon is that it assembles the text in such a way that it’s easier to read, and thus makes it a blessing for both groups.

The text is reformatted into paragraphs with the markings for chapters and verses added in later additions in Arabic numbers in this edition. I particular enjoy original chapters being marked in Roman numerals. As editor Grant Hardy noted, these were apparently marked on the gold plates, and thus reflect the author’s intent. I found them especially helpful in noticing major themes and sections of the text.

The text is further aided by select footnotes that explain possible emendations to the text, highlight or explain major points, and provide cross references.  I’m currently working on a major project that examines classical Chinese military texts beyond Sunzi (Sun-Tzu). I have plenty of experience noticing how subtle changes in punctuation, spelling, and grammar along with occasional emendations can critically change the meaning of the text. This addition takes particularly trenchant commentary from Royal Skousen’s voluminous and excellent work on the matter and presents it to the reader.

Many of the footnotes, as well as a glossary of short essays addressing pertinent topics at the end of the book provide excellent summaries of existing research and major questions about its provenance and such topics as geography and Hebrew poetry. Simply by summarizing and assessing them in a forthright manner Hardy provides aids to both believers and non-believing but interested academics. Explaining something like seer stones in a forthright manner helps members accept items that may be disturbing in other settings. Providing a careful analysis of past apologetic efforts is more palatable for skeptics studying the book, while still making them aware of pertinent research.

The text also includes basic maps, highlights major figures in the text and its organization through simple charts. Probably the most helpful are the excerpts of primary sources from key people involved with the origins of the book, process of translation, and the testimony of those that saw the plates. These are rather informative on their own, but also show that, as the very least, Hardy and the Maxwell Institute care about grounding the reception and origination of the text by using primary sources and proper historical methods. As a historian this makes me proud, while still leaving unresolved the fact that the new MI seems a bit more interested in the 19th century than the old AR (ancient research) part of FARMS and the Book of Mormon.

Overall, I highly recommend the text for believers looking to aid in their devotional study of the text to non-believing scholars wishing to familiarize themselves with what some people say is one of the most important books in American history.  This truly fulfills the purpose of being a study edition.