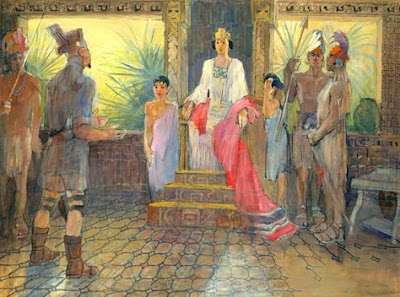 Verse 33 presented one of the most intriguing items after Amalickiah gained complete control of the army:

This presents all sorts of ideas and implications. If the queen requested that he spare the people of the city it suggests that the Lamanite army could have sacked it. Anciently, plunder acted as one of the few reliable ways for an army to get paid, and often acted as a bonus for the success of a campaign. It was the chief motivation for many soldiers, and in many cases their only pay day. In brutal pre modern societies plundering was also the ticket to a better life. Some of the rebels around the capital were likely made up of different ethnicities than the elites in Nephi. The previous king of the Lamanties ruled seven cities (Alma 23:9-12), but his converted people only gathered in two of them (likely the two ruled by the kings converted by Ammon and Aaron), while being attacked from others.[1] Then the former group left entirely to join the Nephites. The Amulonite faction was neutered immediately after the departure of the Anti-Nephi Lehis (Alma 25:6-13 and Alma 28:1-3). And the Amalekites and Zormaites elites were defeated in Alma 43 and 44. Thus whoever was king at the time (the text never says), must have been in a weak position or brokered power arrangement with other factions. There is a good chance in fact, that the queen to whom Amalickiah is negotiating was a part of a marriage alliance upon which the king’s power rested.

Like the faceoff between Amalickiah and Lehonti’s army, perhaps the queen still had military force and the inclination to oppose Amalickiah. But then the queen requested, or possibly ordered, that Amalickiah bring witnesses of the king’s murder. And the next verse says that the witnesses “satisfied” the queen. Hearing testimony suggests some sort of legal procedure. It’s possible that this served as part of the ritual surrounding a coronation the text skipped over, or more theatre to cover the naked ambition of two joint rulers, and likely a combination of both. Historically, the unexpected death of a sovereign often resulted in a mad scramble for power. The queen could easily use her position, and networks of elites to control the capital and remain in power. Amalickiah, in contrast, could use the army as a platform to control the countryside and seize the capital by force. With rival bases of political power, a desire to “spare the people of the city” likely represented a coded political message to end the still simmering power struggle. The queen remained in power; and with Amalickiah she had a partner just as powerful, if not more so, than her late husband. Amalickiah gained by keeping control of the army and possessing a stronger claim to the throne.

This is all good reasoning (if I can say so,) but I found additional evidence in a particularly vivid story.  As historical background for the purported author of the Methods of Sima Chinese historians recorded this:

[After taking command and hearing news of the enemy’s withdraw] thereupon he pursued and attacked the [enemy], subsequently retaking all the territory within the borders of the old fief, returning with the soldiers.   Before he reached the state capital he disbanded the units, released them from military constraints, swore a covenant, and thereafter entered the city. Duke Ching (547-490BC) and the high officials greeted him in the suburbs, rewarding the troops and completing the rites, only afterward returning to rest.[2]

The footnote explains that removal of military constraints consists of the loyalty required of soldiers to their commander. This has obvious implications and recalls Caesar crossing the Rubicon as the most famous example of a military commander using the army for political purposes. I also noted how there was both a ceremony, implied ritual, and rites which recalls the ceremony hinted at in Alma 47. Moreover, this ceremony conforms to the text of the Sima itself.  Several places show how a commander should not be brought back to the city to interfere with the court:

Correspondingly, there are multiple examples of how the military commander should not face interference in the field from officials in the court with often out of date and faulty information. Here is one of the more evocative examples from the Six Secret Teachings of Tai Kong:

After the General has received his mandate, he bows and responds to the ruler: ‘I have heard that a country cannot follow the commands of another state’s government, while an army [in the field] cannot follow central government control. Someone of two minds cannot properly serve his ruler; someone in doubt cannot respond to the enemy. I have already received my mandate and taken sole control of the awesome power of the fu and yueh axes. I do not dare return alive. I would like to request that you condescend to grant complete and sole command to me. If you do not permit it, I dare not accept the post of general.’ The king then grants it, and the general formally takes his leave and departs. Six Secret Teachings of Tai Kong, 3.21

So there was a body of thought in ancient times that commented on the danger of military leaders using their soldiers to seize the court, and how military commanders in the field should not face interference from political leaders during their campaigns. To offer an example using modern terminology, that would be like Abraham Lincoln trying to micromanage the Battle of Gettysburg. Finally, there is a recorded instance of a successful general coming back to the capital and the court, and performing a ceremony with rites that would disband the army and spare the city any conflict between the civilian and martial leaders.

As readers unpack the details surrounding this text and use additional examples from history they can tease out additional details that show there is much more to the story. Thanks for reading! I work as a freelance author so if you found value in this work please consider donating using the paypal button below.

*****
[1] A special thanks Ryan Tanner for his brilliant insights, upon which a good part of this section rests.
[2] Ralph Sawyer trans, Shi Chi, in Seven Military Classics of Ancient China, (New York: Westview Press, 1993) 114. All subsequent quotes from military theorists are from Sawyer’s translation.