3 Posts and a Cover

Greetings! This is a quick post showing some of the recent success I've had. I write full time for Opslens magazine, but I often have articles that are picked up by the Washington Examiner, and sometimes by Fox News.  I was always a bit worried about writing articles that are overtly political. I don't like to be a partisan hack. But I think you'll notice that I focus more on explaining concepts clearly and applying more reason and thought to the articles. In fact, one of my articles explicitly attacks the reliance upon emotion and the need for more thought, so even though these posts are political, I think they are more thoughtful and less shrill than much of the material out there.

Could China Sink a US Carrier? : A fun post that summarizes much of the research I've done into missile defense. In fact, my very first article for Strategy and Tactics Magazine discussed the so called "carrier killing missile,"so I have a ample experience and a good foundation and tool box of knowledge for discussing this topic.

Fighting Obama Care doesn't mean you wish death upon those in need:  This was an article inspired by Debbi Wassermen Schultz's defense of Obama Care by citing her cancer stricken mother. (It was for the now defunct Arsenal of Venice, when I tried to launch my own free lance website.) Of course this was from several years ago, but Jimmy Kimmel ended up doing the same thing when he talked about his son's emergency medical treatment. All of the points I made still applied, so I simply changed a few sentences specific to Schultz.

Revisiting the Axis of Evil 15 Years Later: I remember Bush being mocked for this phrase 15 years ago, but here we facing problems and near war with the two thirds of that axis 15 years later. The benefits of being a historian means that you have additional context with which to judge. Unfortunately, most people get bogged down in the debates of the day and don't pause to consider how the past might apply to the present. (Even more egregiously, the shallow perception of the past is often manipulated to support the present. But that is a historian's lecture I'll save for another day.)

Those are three published articles with the Washington Examinter in a single week, so I think my stock is rising at Opslens haha.  On top of that, I received the preliminary cover for my book: 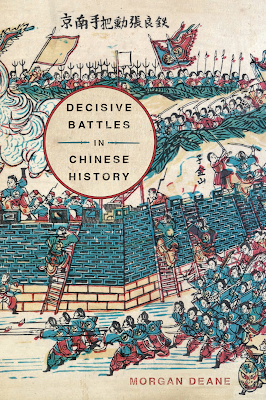 I really enjoy the cover, the publisher had difficulty getting the rights to the other image and a high quality version of it.  This was a pretty good week for my writing and I'm happy to share it with you. Ironically enough, on facebook last year I wrote a pretty frustrated post about nobody giving me time of day and ignoring my work.  But here I am a year later with a regular freelance writing gig, another book coming out, and regularly being picked up by the Washington Examiner. Thanks for reading and I hope you enjoy the articles and buy my book when it comes out!

[I work as a freelance writer. If you found value in this work please consider donating using the paypal buttons at the bottom of the page. Thank you.]