What follows is a post from one of my frequent commentators. This was originally going to be a comment on one of my earlier posts. Due to its length, and the merits of its argument I thought I should promote it to a guest blog post. I also included a map to help guide you through the analysis. What follows does not necessarily endorse a particular geographic model, and is presented as it was sent to me outside of a couple spelling errors and formatting:

Although I am aware of your later post using the Baja California model of A Choice Land, and I do agree with your tactical analysis of the geographical clues in the Battle of Nephihah, I think there are some additional clues from the overall campaign leading to this battle that need to be considered, too.

Since this post involves clues from Sorenson’s analysis that assumes the Jaredites are the Olmec and the Nephites/Mulekites the Highland Maya during the early Zarahemla period, I’ll go with that model to see how the campaign can tell us some more about the geography of Nephihah. 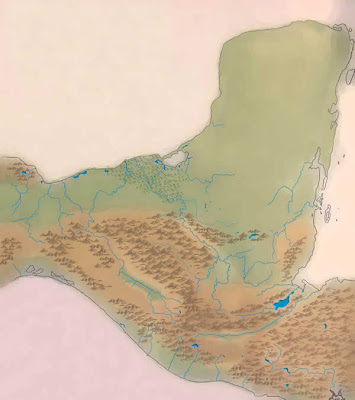 Moroni is built to form the eastern anchor of the Nephite defenses, and is near the East Sea and thus as far south as the mountains that form the natural defense line between the Nephites and Lamanites. However, since it “drowns” later, it probably plugs the gap between the mountains and the sea on the coastal plain and is not in the mountains itself. In the Sorenson approach, this could be near where the Gulf of Honduras reaches southern Belize.

Nephihah is founded at the same time as Moroni and links a natural transportation corridor between Moroni and the direction of Zarahemla. Its relationship with Aaron is not entirely clear; Aaron could be between Nephihah and Zarahemla, or could flank Nephihah on the Moroni-Zarahemla route (guarding an alternative approach). As you point out, it is at the edge of a plain and approachable from above from a more interior Zarahemla defensive perimeter.

Nephihah is inland from Moroni (because the Lamanite thrust stays along the coast) but close enough to be the natural refuge for those fleeing from Moroni. However, Lehi begins to fortify when Moroni falls, indicating that there is a natural approach to Lehi from Moroni. Lehi is NOT a coastal city because Lehi is not among the INITIAL cities to fall during the coastal thrust (as I’ll show below). However, there is something “particular” about the way Lehi is built, which is never explained in the Book of Mormon.

You can think of a couple of things that might qualify in the Mesoamerican model. One would be a natural defensive position that while still primitive, can be fortified easily, such as the site where Yaxchilan will later grow up to prominence and dominate the Usumacinta River Valley. If the Highland Mayan mind regarded anything that was low and swampy in the East as in the borders by the seashore, then the cities built up above the swamps and connected by causeways in the Mirador Basin might also qualify as “particular”. That’s a lot of potential area and doesn’t tightly constrain the location of either Lehi or Nephihah – except that it indicates that Nephihah was not attacked as much because it was well to the west or south of the main Lamanite axis of advance as because of its inherent strength.

Now consider the earlier land dispute between Lehi and Morianton. Morianton wants Lehi, but when the latter city appeals to (Captain) Moroni, the people of Morianton flee to the north into a land of many waters. Again, this would be consistent with fleeing further into the lowlands of Yucatan from within the Mirador Basin, or toward the mouth of the Usumacinto. However, Captain Moroni would hardly regard the former as the kind of strategic threat to the Nephites that the latter would be – and Captain Moroni responds like it’s a mortal threat.

Sorenson regarded the Sidon as the Grijalva River, and the location of Zarahemla in the upland Grijalva River Valley (suggesting the now inundated site of Santa Rosa). From the mouth of the Usumacinta, the mouth of the Grivalja can be threatened, and if occupied, Morianton can control access to the Olmec heartland. Zarahemla would face hostile Lamanites to the south, and, at best, an unreliable power to its north sitting on its most important interior trade route, the Sidon. (Note that if Zarahemla were on the Usumacinta, and Morianton was somewhere to the East, it’s hard to see why Captain Moroni would care if Morianton went north, or how Teancum could be sent to “head” Morianton’s flight if he did.

Now consider one more part of the campaign leading up to the Battle for Nephihah. Nephihah doesn’t just hold the refugees from the City of Moroni; it holds refugees from the fall of Lehi AND Morianton as well. But Lehi must lie somewhere between Morianton and Moroni, and Morianton must then fall before Lehi, or refugees from Morianton would not then be able to flee through the land of Lehi to get to Nephihah.

So there is a self-consistent strategic picture emerging here of the Lamanite advance in the Sorenson approach. I suggest that the Lamanites unhinge Nephite defenses by taking the City of Moroni and occupy the coastal cities against little opposition (quite possibly moving very rapidly – as you’ve suggested in a previous post – by taking advantage of intra-coastal shipping routes for naval supply and movement that Zarahemla, an inland power, cannot then counter. The Lamanites then sweep UP the Usumacinta River Valley and clear Morianton and Lehi, with the inhabitants of those cities fleeing further up the river to Nephihah. Nephihah is then the obstacle that prevents the Lamanites from linking up their advance with their homeland and shortening their supply line by a lot, securing their conquest of all of the Nephite eastern lands and advancing on Zarahemla either along a direct route from Nephihah, or almost anywhere from the south and east. (Moving against Bountiful would allow them to also replicate Morianton’s original strategy of seizing the mouth of the Sidon).

Indeed, when Nephihah falls, it is due to reinforcements of Lamanites moving around the perimeter of the Nephite lands to the south. So this would place a possible location for Nephihah nearer the headwaters of the Usumacinta, guarding a passage between the Lamanite lands and the Usumacinta River Valley and/or between the Usumacinta and Grijalva watersheds.

As you do, I’d place all sorts of disclaimers on the particular model. But what I want to note is the rich detail and self-consistency that exists in the military aspect of the story at tactical, operational, and strategic levels in the MesoAmerican model, because whatever geography Joseph Smith and early church leaders imagined about the location of the Book of Mormon before 1830, it wasn’t this one.

Thanks again for posting this, Morgan. I love the map you found.

I'm learning to use Paint software to label the map, so, hopefully, I'll be able to send back a map that will make the terrain relationships more obvious.