Hastings, History, Human Nature, and the Book of Mormon 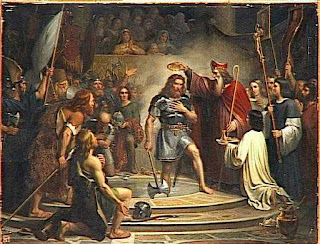 A great feeling in my research is when I read something that supports the analysis I’ve previously done. This has happened in the matter of preemptive warfare, insurgency and the misuse of words. I'm doing a project on the Battle of Hastings and wrote this analysis:

The rear guard action possibly suggests that Harold had gained some loyal support among his followers. Though it’s also possible and more likely even this was simply self-preservation. The foot soldiers couldn’t out run the motivated cavalry forces, flush with victory and looking for easy kills. So the soldiers didn’t want to be lanced from behind as they were running and chose to form an ad hoc defensive position that turned out to be deadly for the pursuers disorganized by their enthusiastic chase.

I wanted to make sure I wasn’t missing any information so I went and read some primary sources. Except for the knights coming upon a trench unaware, I was entirely correct about what happened just from intuition and here is the writing of Oderic Vitalis:

The Normans, finding the English completely routed, pursued them vigorously all . . . night, but not without suffering a great loss; for, galloping onward in hot pursuit, they fell unawares, horses and armor, into an ancient trench, overgrown and concealed by rank grass, and men in their armor and horses rolling over each other, were crushed and smothered. This accident restored confidence to the routed English, for, perceiving the advantage given them by the moldering rampart and a succession of ditches, they rallied in a body, and, making a sudden stand, caused the Normans severe loss…

Things like this are always a great pat on the back letting me know that I’m doing a good job of analyzing these events. They are also good reinforcements. I’ve had people pushback on my analysis and call me names for it. They are variously upset that I disagree with accepted narratives about the Book of Mormon and the heroes within it. I’ve been called a Marxist schmuck for suggesting the Gadianton Robbers might have had some legitimate complaints. (I find this especially ironic because I mocked accounts written by leftist reporters about the Chinese insurgency.)  When I suggested that Nephite leaders were elites protecting their interest, instead of accepting this as pretty normal conclusion after reassessing the text in critical fashion, fundamentalists suggested I was ruining the text of the Book of Mormon and personally attacked my righteousness.

So why do I mention this here?  The same principles that let me correctly identity details about the Battle of Hastings before reading it are the same principles that make me offer new and innovative interpretations that should be uncontroversial things about the Book of Mormon. Human nature largely remains the same and its especially observable in matters of war and politics. Knowing that nature lets me guess how certain events happened at Hastings because I have a credible claim of knowing what they are thinking and feeling.

Ancient historical texts are written for a reason and weren’t as interested as modern historians in factual accuracy. In the case of Hastings many of the details were altered to support William’s claim to the English throne and Harold’s illegitimacy. The night before the Battle of Hastings historians reported the Normans as praying all night and confessing their sins, but the same source implies they looted London at the very moment William was coronated. So the texts often change or spin certain events, sometimes they present dubious claims to rule and attack the legitimacy of others. Just writing the previous sentence I couldn't help but think of competing Nephite and Lamanite founding narratives (Mosiah 10:13-17), though you could make the same observations about the competing claims to the English crown.

Mormon’s goal was to present a spiritual message which meant at times that details were changed or left out. Except for times when they Nephite behavior invoked moral condemnation, the Nephites were the good guys. So their elites often did things like expand their power by conquering new lands (Alma 50), exaggerate the wickedness of their enemies, and protect their right to rule while portraying similar behavior from non-Nephites as wicked and scary. A particularly striking example happened after the Lamanites converted. When they became members of the good guy club suddenly their war like behavior, which was normally part of their depraved natures, became laudatory because they were part of the club fighting against Gadianton Robbers. To read more about these features of human nature please see this post.

As the title of my book implies, some texts try to portray some people as “Saints” and good guys opposing the bad guys and “Sinners.”  Just like the soldiers at the Battle of Hastings or William’s claim to the throne of England a critical assessment of the text reveals more about the behaviors of leaders in Book of Mormon. The reality is that people in the text are often closer to being both Saints and Sinners. As I often say, orthodox Mormons will fight to death that the Book of Mormon is historical, but then they choose to read the text like it’s a kids story or bad propaganda and attack those that read it as history. I will keep reading the text as historian reads histories.