A Soldier in Armor Does Not Bow: The Book of Mormon’s Debate with Chinese Theory 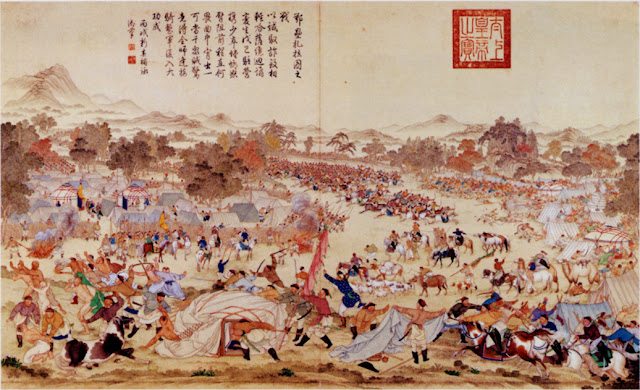 Two interesting quotes from the Chinese military writing Wei Liaozi introduces interesting questions about the place of ritual in the army camp. This was a latter work than other and far more famous classics like Sunzi (Sun-Tzu) and represents a possible development in Chinese thought away from what the Kaangxi emperor called, “nonsense about water and fire, lucky omens and advice on the weather, all at random and contradicting each other.”[1]

The first quote is clearly the lessons from a military commander that rejects divine intervention in battle:

Now if there is a fortified city and one attacks it from the east and west but cannot take it, and attacks from the south and north but cannot take it, can it be that all four directions failed to accord with an [auspicious] moment that could be exploited? If you still cannot take it, it is because the walls are high, the moats deep, the weapons are implements fully prepared, the materials and grains accumulated in great quantities, and their valiant soldiers unified in their plans….


The Chu general Kongzi Xin was about to engage Chi in battle. At that time a comet appeared, with its tail over Chi. [According to such beliefs] wherever the tail pointed would be victorious, and they could not be attacked. Kongzi Xin said: ‘What does a comet know? Those who fight according to the comet will certainly be overturned and conquered.’ On the morrow he engaged Chi and greatly defeated them. The Yellow Emperor said: ‘Putting spirits and ghosts first is not as good as first investigating my own knowledge.’ This means that the Heavenly Offices are nothing but human effort.[2]

This was interesting to me for at least several reasons. First, this is something which many modern readers would agree with. After all, a comet doesn’t determine who wins a battle.  Instead the military leaders assess the physical factors like the height of the wall and preparation of the army.

But the second reason comes from its clash with the Book of Mormon. Mormon very clearly felt that God’s protection made the people powerful.  One of God’s prophets was saved by a rare celestial event in 3 Nephi chapter 1. Helaman 4:23-26 provides a counter argument to Wei Liaozi:

And because of their iniquity the church had begun to dwindle; and they began to disbelieve in the spirit of prophecy and in the spirit of revelation; and the judgments of God did stare them in the face. And they saw that they had become weak, like unto their brethren, the Lamanites, and that the Spirit of the Lord did no more preserve them; yea, it had withdrawn from them because the Spirit of the Lord doth not dwell in unholy temples—


Therefore the Lord did cease to preserve them by his miraculous and matchless power, for they had fallen into a state of unbelief and awful wickedness; and they saw that the Lamanites were exceedingly more numerous than they, and except they should cleave unto the Lord their God they must unavoidably perish.
For behold, they saw that the strength of the Lamanites was as great as their strength, even man for man. And thus had they fallen into this great transgression; yea, thus had they become weak, because of their transgression, in the space of not many years.

According to Mormon the Nephites lost not because the walls were high and the moats deep, but because the Lord’s spirit has ceased to be with them. They were no longer preserved by his miraculous and matchless power. So Wei Liaozi focuses on human effort, while the Book of Mormon clearly shows that human effort is a part of it, but true victory relies upon God’s preserving power.

The second quote is related to the first, and it involves the behavior of armies.  As I described in what could be the common soldiers’ negative opinion of Moroni, despite being a central figure in the war chapters his character is blinded by hagiographic verses such as shaking the foundation of Hell (Alma 48:17) or his being beloved of all the people (Alma 53:3). The average soldier likely wasn’t nearly as righteous as the text suggests. They likely resented the extra labor imposed upon them and found Moroni to be a stern prig. I invite you to read all of those examples and arguments in the link.

But the next quote suggests there are negative consequences to being too exacting in the application of rites:

When Wu Chi engaged Chin in battle, wherever he encamped the army did not flatten the paths between the fields. Young saplings provided protective covering against the frost and dew. Why did he act like this? Because he did not place himself higher than other men. If you want men to die, you do not require them to perform [perfunctory acts] of respect. If you want men to exhaust their strength, you do not hold them responsible for performing the rites. Thus, in antiquity an officer wearing a helmet and armor did not bow, showing people that he is not troubled by anything.[3]

The Methods of Sima, another military classic, expounds upon this concept exceptionally well:[4]

In the civilian sphere words are cultivated and speech languid. In court one is respectful and courteous and cultivates himself to serve others. Unsummoned, he does not step forth; unquestioned, he does not speak. It is difficult to advance but easy to withdraw.
In the military realm one speaks directly and stands firm. When deployed in formation one focuses on duty and acts decisively. Those earing battle armor do not bow; those in war chariots need not observe the forms of propriety [li]; those manning fortifications do not scurry... Thus the civilian forms of behavior [li] and military standards [fa] are like inside and outside; the civil and martial are like left and right.

There are no specific verses about how he acted in camp or on campaign.  Moroni is a revered figure by readers including me in boot camp. He did attack the central government for their stupor of thought which suggests that he felt at least in this instant his military command outweighed the civilian oversight. This could suggest that he firmly felt he shouldn’t have his strategy dictated by the dilatory actions of those in the capital.

He seems like a strong military man that didn’t suffer civilian fools (Alma 60), yet also like a spiritual rock that would shake the powers of Hell forever (Alma 48:17). The deciding text for me is in discussion about the Sons of Helaman in Alma 57:21:

[They d]id obey and observe to perform every word of command with exactness; yea, and even according to their faith it was done unto them; and I did remember the words which they said unto me that their mothers had taught them.

The key word here is exactness, and this doesn’t directly apply to Moroni but his complaints against the government and another military force praised for “exactness” suggests Moroni would have enforced various rules in camp, was such a stickler for the rules, and he cared about even the minor infractions and  perfunctory rituals mentioned by Wei Liaozi.

If this is an open ended question that isn’t answered by specific verses my personal experience makes me believe that a stern leader, impressed by “exactness,” would make an armored soldier bow. I’ve served in the military, and I can say that small things such as making sure your field jacket is all the zipped or completely unzipped (not halfway like an “effing GQ model” as my Sergeant said), or making sure that the caps to your canteens are snapped shut are a big deal in many units under the that these things lead to better discipline and combat performance. A good unit, or at least those with overbearing commanders often mistake trifling exactness with discipline. In fact, Wei Liaozi’s next comment vividly reminded me of my time in service: “To annoy people yet require them to die, to exhaust their strength, from antiquity until today has never been heard of.”

Yet even though Moroni’s behavior contradicted these theories, the editors of the Book of Mormon strongly disagreed and felt his behavior was important and necessary.

The two ideas about perfunctory ritual and divine intervention are connected. After all, if you don’t think that heavenly officers and omens helps an army’s performance in battle, the soldiers and leaders wouldn’t see a practical advantage in stressing the observance of those rituals. The righteous Nephites in the Book of Mormon certainly believed that their spiritual strength mattered in combat. Moroni rallied the people and made them covenant under the Title of Liberty, and articles by Stephen Ricks among others discuss how the Stripling Warriors reflected “outstanding purity.” These both suggest the Nephites considered religious rites rather important, as they could affect the outcome of the battle and the survival of the Nephites.

The importance of ritual during army life and divine intervention in battle matters to every soldier that has faced potential combat, and becomes an important question for governments that send them into combat. The Book of Mormon has a very clear message on the importance of righteousness and the observance of proper behavior by soldiers, and the divine hand that supported the Nephites. It is not in the same exact language, but it enters the conversation and debate on matters that challenged leading thinkers in the ancient world from Thucydides to Wei Liaozi.

Thanks for reading. I work as a freelance author. If you found value in this work please consider donating using the paypal button below and you can get more articles! Or you can buy one of my excellent books which refines the ideas presented on the blog!
**********