Its All Greek to Me: Part II 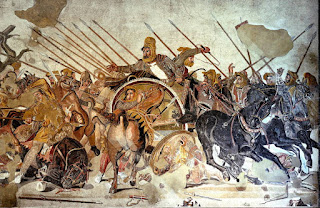 This posts continues my discussion of ideas and notes from reading the Greek sources. This week I cover the issue of fake news, preemptive war, and austere characters among others.

ii.4.18-23 hearing the man’s message, they conducted him to Clearchus and told him what he had said. When Clearchus heard [the rumor of Persian movements] he was greatly agitated and alarmed. But a young man, one of those who were present, after reflecting a little on the matter, observed that the imputed designs of making an attack, and of breaking down the bridge, were not consistent. ‘For,’ said he, ‘if they attack us, they must certainly either conquer or be conquered; if then they are to conquer us, why should they break down the bridge? For even though there were many bridges, we have no place where we could save ourselves by flight, but if on the other hand, we should conquer them, then, if the bridge is broken down, they will have no place of retreat…It was then immediately concluded that the barbarians had sent this man with an underhand object…They then prepared for rest, but did not neglect, however, to send a guard to the bridge…but neither did any of the enemies come near the bridge.


The issues of fake news, incivility in shouting down Republicans that try to eat at restaurants and increasingly rancorous tone from politicians seems to be new and dangerous trends. But the Greeks dealt with fake news. Both the common citizen that didn’t have a great deal of education or much to lose, and the generals with the lives and deaths of polities and thousands of people on the line had to process information. In fact, the Greeks in this case had to do it in several instances. They didn’t receive news of Cyrus’s death (their employer fighting for the Persian throne). They had to assess Persian intent based on several messages sent to them, and the likelihood of Persian betrayal. The point is that our modern problems are not so special, and the answers to those problems are not very hard. A bit of calm assessment and self-reflection in the face of fear and great agitation helped the Greeks described by Xenophon make a better decision that in this case literally saved their lives. The Greeks remained alert and set guards, but the bulk of the army rested in security after seeing through the fake news they were given. Some calm calculation, or maybe sitting down and reading a book of Greeks rationally thinking might be better than posting another facebook rant or meme based on incomplete information.


ii.6.9-15 Clearchus is reported to have said that a soldier ought to fear his commander more than the enemy, if he would either keep guard well, or abstain from doing injury to friends, or march without hesitation against foes. In circumstances of danger, accordingly, the soldiers were willing to obey [Clearchus] implicitly, and wished for no other leader; for they said that the sternness in his countenance then assumed an appearance of cheerfulness, and that was severe in it seemed undaunted against the enemy; so that it appeared indicative of safety and not of austerity. But when they were out of danger, and were at liberty to betake themselves to other chiefs, they deserted him in great numbers; for he had nothing attractive in him, but was always forbidding and repulsive, so that the soldiers felt towards him as boys towards their master.


Outside of what seems like an archetype of the man who can’t live without a war, I highlighted the two things that stood out to me the most in that post. Austere is a particular word that also described an enigmatic figure in the Book of Mormon. Zeniff described his commander as an “austere and a blood-thirsty man commanded that I should be slain (Mosiah 9:2).” Using the same word could be just a quirk and doesn’t show much, except that Zeniff also “hesitated” to march against the Lamanites and wanted a peace treaty with them. That is one of the three things listed as deserving punishment from the austere Clearchus. That Greek general also seemed to be “fond of war”(ii.6.6), which might be translated by Mormon as bloodthirsty.

The text of the BoM is so sparse you can’t really say it’s a perfect fit. But I still found this incredibly intriguing. I often use different models from history to try and tease out additional details. The behavior of Clearchus adds color to the story surrounding Zeniff’s two verse account of the inter Nephite conflict and my gut reaction is that this is a strong comparison. The general was good at battle and those qualities that made him seem austere brought victory on the battlefield, but made him friendless and restless in times of peace. When Zeniff hesitated to fight the Lamanites in the middle of what I call a preemptive strike, it sparked those austere qualities in the unnamed general and led to civil war.


i.4 For indeed some idea of a whole may be got from a part, but an accurate knowledge and clear comprehension cannot…episodal history contributes exceedingly little to the familiar knowledge and secure grasp of universal history…It is only by combination and comparison of separate parts of the whole-by observing their likeness and difference- that a man…can obtain a view at once clear and complete and thus secure both profit and the delight of history.


My latest book is on comparative military history that studies a bunch of battles around 400 AD. I thought highlighting different cultures at the same time was novel and a good way to see how geography and culture might affect the development of armies and the conduct of their wars. It’s always nice when I’m reading along and get reinforcements for arguments I’ve already made.


ii.47 But when the war had lasted some time, and Cleomenes had revolutionized the constitution of his county, and had turned its constitutional monarchy into a tyranny, and, moreover, was conducting the war with extraordinary skill and boldness- seeing clearly what would happen, and fearing the reckless audacity of the Aetolians, Aratus determined that his first duty was to be well before hand in frustrating their plans.


My eyes got a little bigger when I saw this and wrote down: preemptive war. This is important as a source in several ways. I remember a know nothing blogger at a certain place in the Bloggernacle. I don’t want to be mean or start or blog war, so lets just call it the Centennial Bar. He wrote that the constitution plainly forbade preemptive war. Having an interest in the matter (for a reason I’ll explain in a minute), I wanted to know what specific clause stated this. He provided a long screed that attacked drone strikes, never ending war, the military industrial complex, and several items in the same vein, but didn’t provide a specific clause and provision in the constitution. Some others fumbled and said that a “plain reading” of the text supported that condemnation. But as I’ve said before, the “face” in “face value” reading has a similar Latin route to superficial, so I don’t really think that was a strong argument.

In talking about my free lance career I mentioned you have to have a strategy. In order to get noticed a scholar has to plant his flag somewhere. I recently got an email from the Michigan War Studies Group, and I noticed how many books there are on World War II and the Civil War. This reminded me of a visit to the Society Military History years ago historians on those conflicts (WWII and American Civil War) are a dime a dozen. That reinforced to me that something like Chinese history might be a better field to plant my flag. In the field of Mormon studies, I not only focus on preemptive war as a way to distinguish myself from other military historians and scholars, but there are numerous punks and posers in the online world that pontificate and assume a burn the witch quality about the subject. As Colin Gray and Duane Boyce have noted, there is an almost “demonic hatred” of preventive war, and a “reproach without evidence” style to condemning those who supported the Iraq war, or the use of military force in general.[1] So I make sure to write down every reference to it in history, to better add to my tool box when I discuss the subject and Polybius didn’t disappoint with his discussion of Aratus saving Greeks from a tyrant. When I discuss preemptive warfare I won’t have to rely on vague screeds but can instead point to example from Polybius to Epaminondas and Sunzi (Sun-Tzu) to support my analysis.

Thanks for reading. I really enjoyed re reading the classics and look to move on to other texts like the Ruin of Britain by Gildas and The Deeds of Robert Guiscard.


I work as a free lance author. If you found value in this article please consider supporting it using the pay pal button at the bottom of the page.
*****

[1] Duane Boyce, Even Unto Bloodshed: An LDS Perspective on War (Salt Lake City: Greg Kofford Books, 2015), 171-173. Colin Gray, The Implications of Preemptive and Preventive War Doctrines: A Reconsideration, (Strategic Studies Institute Online, 2007), 28. http://www.strategicstudiesinstitute.army.mil/pdffiles/PUB789.pdf : For a representative sample of the most extreme and unacademic versions, see Kendal Anderson, War: A Book of Mormon Perspective: How the War Chapters of the Book of Mormon Warn Against Wars of Aggression and the Warfare State, (Create Space, 2014), 21 where “evil power hungry dictators” are the only ones that start preemptive war, and page 42 where he calls the practice an “assault on humanity itself.” For a sample of the voluminous personal attacks on proponents of the practice, Irvin Hill wrote, “A writer proving the Book of Mormon defense of Preemptive war, or just another war mongering propagandist?,” Obedient Anarchy, January 28th, 2015. (Accessed, October 21st, 2016 http://www.obedientanarchy.com/2015/01/28/a-writer-proving-the-book-of-mormon-defense-of-preemptive-war-or-just-another-war-mongering-propagandist/ )
Posted by Morgan Deane at 3:00 PM