To pull down their pride...

A long time ago I found a great reference from Book of Mormon warfare in Mesoamerican history. But then I couldn’t find it again. I thought I had it in my notes but didn’t seem to have the right reference and I didn't have the book in my library.  Recently I had to check some old sources for my upcoming publication, and there it was!! 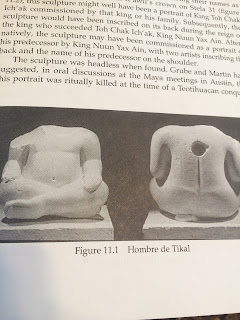 Tikal is one of the most important classic Mesoamerican cities, but there is still significant disagreement and debate about how a ruler might maintain legitimacy if foreigners rulers were placed on the throne. Archaeologists have found a sitting man statue with its head cut off.  The statue likely represented the king and its head ritually cut off.  The most interesting part is on the back. There is a different script still undeciphered and “someone drilled a large jagged hole through it, ending in a deep, round socket in the back of the figure. If the desecrated Hombre de Tikal sculpture were laid prone (the typical pose for a Maya elite captive), the drilled hole would be suitable for insertion of the wooden shaft of a battle standard…We would suggest that even after Nuun Yax Ain and his allies took the Tikal throne from Toh chak Ich’ak, he carried out a series of magical acts designed to legitimate his insertion in the dynastic succession.”[1]

I think this provides additional context to Moroni’s action against the King Men.  Alma 51 uses the verb “pull down” in verses 17 and 18. After being slain in battle and cast into prison the King Men were “compelled to hoist the Title of Liberty upon their towers and lands” (v.20). The Title of Liberty was an important symbolic reference in Nephite history that held both ritualistic and spiritual importance.[2] And the “pulling down” can refer to specific objects such as the statues that represent their authority. Its not exactly stated in the text, but I can’t help but see how a pulled down statue with a hole in the back could refer to the pride that Moroni “pulled down” and the Title of Liberty they were forced to fly. Its not directly stated, but I think given the possible location of Book of Mormon events and the political subjugation of the King Men combined with the unique phrase to "pull down" it makes this an intriguing idea.

[Thanks for reading. If you found value in this work and want to see more ideas, please consider using the pay pal buttons below to make a one time or recurring monthly donation.]


[1] David Freidel, Barbara MacLeod, and Charles Suhler, “Early Classic Maya Conquest in Words and Deeds,” Mesoamerican Warfare, Kathryn Brown and Travis Stanton eds., (Oxford, Alta Mira Press: 2003), 195 (192-196).
[2] See my book, Bleached Bones and Wicked Serpents: Ancient Warfare in the Book of Mormon, pages 57-64 for more.  Many people seem to be impressed with Kerry Hull’s new article.  I was a bit frustrated because his article didn’t show me a great deal I didn’t already know. In fact, I could have written much of it, and as you see from the above, he missed at least one item that might have informed our understanding of the Book of Mormon. Kerry Hull,”War Banners: A Mesoamerican Context for the Title of Liberty”  Journal of Book of Mormon Studies 24 (2015): 84–118.

Intriguing. So "pulling down their pride" could have been a literal act, not merely a figure of speech.